Is this a bargain buy, or a value trap? Let’s take a look. This post was originally posted here. The writer, Ernest Lim is a veteran community member and blogger on InvestingNote, with a username known as el15 and has 456  followers.

First up, a description of CRCC

Based on Figure 1 below, CRCC is widely covered by 21 analysts. It is noteworthy that all 21 analysts give a buy call on CRCC with an average target price of HKD12.00. This represents a potential capital appreciation of approximately 113%. The estimated dividend yield is around 5.0% hence the total potential upside may amount to 118%!

According to a plan published by China Railway Group dated 13 Aug 2020, it plans to almost double China’s high-speed rail network from 36,000km to 70,000km over the next one and a half-decade. The total length of the track is likely to also increase more than 40% from 141,400km to 200,000km. This spells ample opportunities for CRCC over the medium to long term.

3. Spins off subsidiary to unlock value and control leverage

On 15 June, CRCC said they have submitted documents on the listing of China Railway Construction Heavy Industry Corporation Limited (“CRCHI”) on the Science and Technology Innovation Board of the Shanghai Stock Exchange (“SSE”). This is pending the approval of the SSE and the completion of the CSRC registration procedure. If this listing materializes, it should unlock value and allow it to replenish its capital to allow it to accelerate growth opportunities. According to a Goldman Sachs report dated 18 Sep 2020, they cite that management is confident that the listing will be complete by end of 2020.

On 25 July 2020, CRCC announced that for 1HFY20, it has clinched new contracts amounting to RMB876b, up 21.9% year-on-year. This is remarkable given that most sectors have seen at least some decline in economic activity due to COVID19 in 1Q2020. Equally impressive, CRCC has outstanding contracts worth a whopping RMB3,562b! (See Figure 2 below) 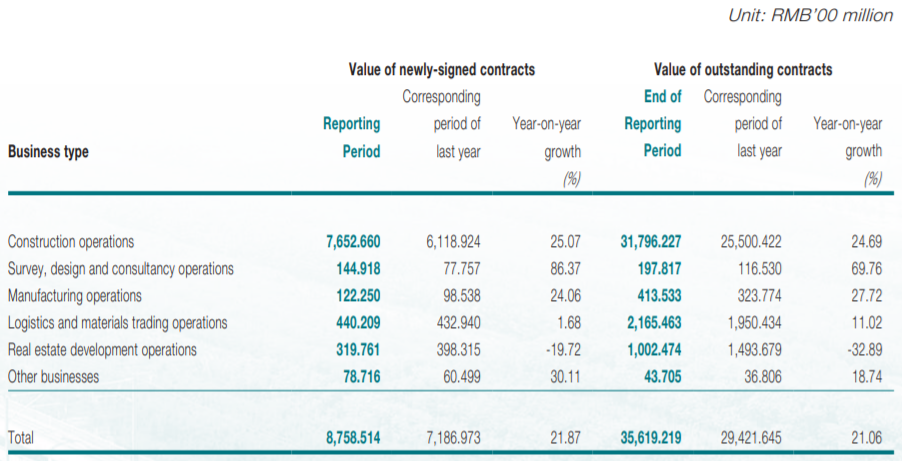 At HKD5.64, CRCC is trading at a mere current P/BV and PE of 0.3x and 3.6x, as compared to its 10-year average P/BV and P/E of around 0.9x and 8.6x respectively. In fact, if I were to compare against 2-year and 5-year averages, both CRCC’s P/BV and P/E are trading at more than 2 standard deviations away from the averages. As such, CRCC’s valuations are at depressed levels which provide a certain margin of safety for investors (assuming no further negative news).

As with almost all investments, they do carry risks. I have listed some noteworthy risks but do note that it is not an exhaustive list of risks.

Besides having no access to CRCC’s management, I have limited access to updated analyst reports and articles. This is a challenge that I face in researching this company.

CRCC is entrenched in a downtrend as evidenced by the declining exponential moving averages (“EMA”). At the close of HKD5.64, this is near the closing low last seen on 12 Mar 2014 (HKD5.63) and 30 Aug 2012 (HKD5.56). ADX has been increasing amid negatively placed directional indicators and closes at 27.5 on 21 Sep 2020. Indicators are weakening with MACD doing a bearish centerline crossover. RSI and OBV are also weakening. In short, this is a bearish chart. However, I draw comfort that volume has been lower than average on days that CRCC is down. A sustained breach above HKD6.20 with volume expansion negates the bearish chart outlook.

Chart 1: CRCC has fallen seven out of the past eight consecutive days!

On 2 Sep, FTSE Russell announced that its FTSE China 50 index will remove CRCC (one out of three companies) from its index, effective after the close of trading on 18 Sep. Hence the recent selling pressure may also be due in part as index-tracking funds prepare for the changes.

Based on Chart 1 above, CRCC actually breached the downtrend line on 17 Aug before the announcement of the sudden demise of CRCC’s Chairman Chen Fenjian on 18 Aug. As of now, from the media which I have access to, I have not seen any definitive results from the police investigation into Chairman Chen’s death. However, some media articles speculated that Chen committed suicide. According to some media articles, a team from the State-owned Assets Supervision and Administration Commission started an investigation in CRCC and was slated to complete its investigation last month (I am not sure what is the scope of the investigation and whether it is a normal or special investigation). None of the limited analyst reports (which I have access to) has mentioned about this investigation.

The average daily range for CRCC is around HKD0.16 which translates to approximately 3% of its last closing price HKD 5.64. In other words, CRCC can easily swing +3% or -3% from its previous day close on a normal day. Thus, this is a volatile stock and may not be suitable for everybody.

Readers should be cognizant of the pros and cons in owning CRCC shares. Personally, what attracts me is its extremely low valuations, strong order books, likely better 2HFY20F performance vs 1HFY20 and its potential spin-off of its subsidiary. Nevertheless, readers are reminded of some of the potential risks (see above) which you may face, in investing in CRCC. Clients / readers are encouraged to visit CRCC’s website HERE and do your own due diligence. Investments carry risk and its best to be familiar and comfortable in what you invest in.

Please refer to the disclaimer HERE.

Once again, this article is a guest post and was originally posted on el15‘s profile on InvestingNote.