David Dreman is the chairman of Dreman Value Management Inc. and his Dreman’s High Return Fund is one of the all-time highest returning mutual funds in the USA since its introduction in 1988. He is widely knowns for his iconic contrarian investment strategy and has authored a few books that revolves around this theme, including the investing classic and bestseller “Contrarian Investment Strategy: The Psychology of Stock Market Success(1980)”. 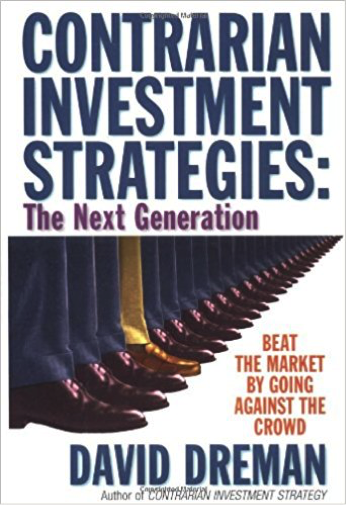 When Dreman first entered Wall Street in the 1960s he was caught up with the prevailing optimism in the market where “fashionable” stocks were up twentyfold. Within a couple of years many of those stocks had plummeted. Stung by his experience, Dreman began researching the drivers of investing bubbles. He was perplexed as to why investors hadn’t realised that they’d been swept up in an enormous folly.

“The failure rate among financial professionals, at times approaching 90%, indicates not only that errors are made, but that under uncertain conditions, there must be systematic and predictable forces working against the unwary investor.”

Dreman especially holds contempt for experts and analysts, whom he has extensively researched on and noticed that their estimates were on average 44% off even when provided with a 5% margin of error. He concluded that in general analysts are no better at stock picking than a flip of a coin! The latter half of his observation stems from the fact that investors pay too much for companies that appear to have the best growth prospects but react too negatively to companies with weak prospects. Hence, astute contrarians can profit by taking a position against the crowd with anticipation that results will be better than expected and an improving trend in return-on-capital will emerge. 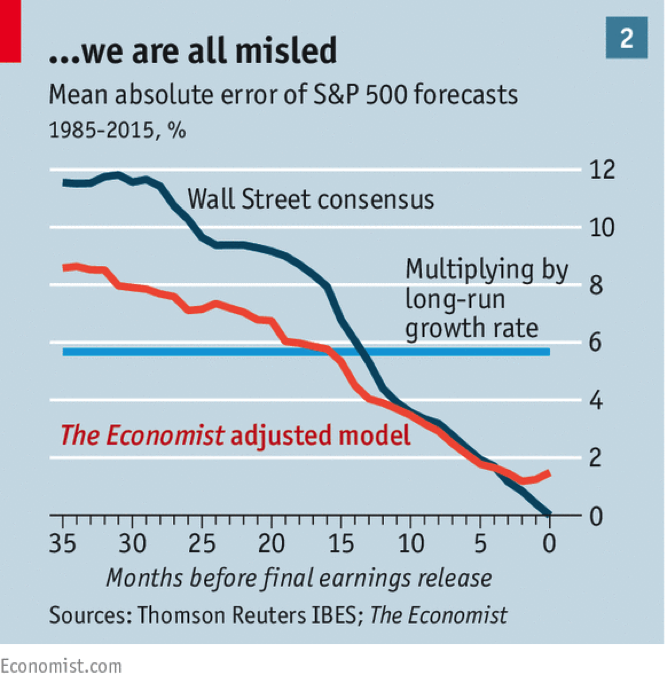 Graph from The Economist: Sell-Side Share Analysis is Wrong

With this investing philosophy in mind Dreman surmised his simple yet mechanical strategy of picking stocks:

“I buy stocks when they are battered. I am strict with my discipline. I always buy stocks with low price-to-earnings ratios, low price-to-book value ratios and higher-than-average yield. Academic studies have shown that a strategy of buying out-of-favor stocks with low P/E, price-to-book and price-to-cash flow ratios outperforms the market pretty consistently over long periods of time.”

Stocks with high PER are often attributed to investor’s overconfidence in the stock. Hence Dreman researched on how earnings surprises, both positive and negative affect the prices of expensive and cheap stocks for a period of 24 years between 1973 and 1996. 95 quarters in all were studied and between 750-1000 companies in each of the 95 quarters of the study.
They ranked stocks into five sets of quintiles ranked by PER, PCR and PBR. The top quintile (quintile = 20% of sample) were the most favoured stocks, the bottom quintile the least favorited. Prices were measured against consensus forecasts every quarter between 1973 and 1996.

Results were as follows:

The bottom (cheap) quintile of stocks responded positively to earnings surprises. Per quarter they averaged 1.5% above market and over the full year beat the market by 4.2% per annum. This means that the combined effect of all surprises, positive and negative, worked in favour for the cheap stocks. Middle quintile stocks performed just below neutral, underperforming by 0.2% per quarter and 0.5% per annum. Top quintile stocks underperformed, returning 1% per quarter less, or 3.5% per year. Stocks with a low price to earnings ratio surprised the market by returning 4.2% per year above the general indexes whilst expensive stocks disappointed by 3.5% per year.

It can be concluded in a longer time frame low PER stocks will outperform stocks with high PER.

Companies that are ripe for contrarian plays often have a good reason for being in that particular position, mostly due to enormous losses and poor business operations. As such, further losses will likely see muted negative impact on share prices. However, if the company makes even a modest profit which may signal a turnaround, the growth in earnings will probably be astronomical.

Hence, for this criteria Dreman has learned to keep an eye out for companies that still have a long way to fall. He will only invest if he can determine if a company has decidedly hit the bottom and is starting to turnaround.

He has a simple approach to determining if a company has bottomed out, which is to look at consensus estimates. Though he has a disdain for analysts and does not follow precise estimates, he does look at Wall Street forecasts to a certain extent, to see if forecasts show huge continued losses. He has observed that when analysts are overwhelmingly convinced that earnings have further to fall then it is best to take heed and avoid the stock.

Dreman generally dislikes investing in small cap and penny stocks as he observed that for such stocks survival rates are lower and transaction costs are higher Furthermore, due to the illiquidity of such stocks the spread is big, which may completely offset the much higher theoretical profits of such companies.

Also, Dreman is of the opinion that accounting is a “devilishly tricky subject” as from experience both novice and sophisticated investors have often misinterpreted crucial elements of accounting statements. Hence, medium to large firms that will generally provide a more honest view of accounting are preferred as larger firms with long records are watched more closely by a wider range of investors and regulators.

Another reason to favour medium to large cap companies is that through studies Dreman has found fewer large firms has gone completely out of business. Furthermore, large companies have greater managerial and financial resources to weather a company or industry slowdown or problem. Also, stocks of rebounding large companies tend to be in the public eye and get noticed more quickly when things go better for the company which should result in a higher valuation for a given level of earnings.

Dreman was a big fan of Benjamin Graham’s work. For added margin of safety, Dreman also believes it is important to consider the financial strength of a company when pursuing a contrarian investment strategy. A strong financial position enables a company to work through periods of operating difficulty commonly experienced by out-of-favor stocks. Financial strength is also a measure of stability and ensures that dividend payout is sustainable.

Both short-term obligations of the company along with long-term liabilities should be considered when testing for financial strength. Ensuring that the company has sufficient reserves and conservative debt levels will mitigate the risk of default in turbulent times.

Lastly, Dreman seeks companies with a high dividend yield that the company can sustain and possibly raise. The yield helps to provide protection against a significant price drop, and also contributes to the total return of the investment. Hence, ensure dividend cover and dividend payout ratios are reasonable, as a cut in dividend will have a negative impact on share price.

Dreman also discussed a little about his exit strategy in his books. It mostly boils down to one rule, which is to sell a stock when PER approaches that of the overall market, regardless of how favourable prospects may appear. Hence, sell when the stock has reached the same price as the general market as a new contrarian stock will have better prospects. Also, look to sell it if the stock appears to have a deteriorating outlook, as fundamentals have changed. Dreman warns against applying contrarianism for the sake of contrarianism. The idea of contrarianism is to buy undervalued stocks, not bad stocks.

Dreman also has suggestions on how long to hold onto a stock that has not realized its potential. To him it is all pretty much a matter of choice, but give a period of 2.5 or 3 years for the stock to work out.

In the next post I will look at a few SGX stocks where the contrarian strategy could theoretically be applied. Given the poor performance of some mid to large cap stocks recently there should be some interesting picks!

—
This column is written by @j_chou from InvestingNote.com.
–@J_chou has an interest in global macro trends, financial markets and equity research and enjoys applying a combination of the three in his investments. His eventual investing goal is to manage a risk parity portfolio and achieve true financial freedom.