Many of them were generally bullish at the beginning of Year 2018. By today, on the 1st day of trading for Year 2019, it retreated another nearly 30 points, -29.87 (to be exact). Surely, many players have been slowly but surely cashed out of the market as the market retreated. Even those with cash to spare were not willing to get into the market. Just as we know in economics, there were more sellers than buyers for year 2018. That, precisely, was the reason for the market to fall.

This post was originally posted here. The writer is a veteran community member and blogger on InvestingNote, with username known as BrennenPak, with more than 3,000+ followers. With each market fall, it flushes out some players. The unfortunate thing is market retreats and advances are never linear with time. They are never exactly predictable, especially over a longer of period of 6 months and longer. Market volatilities are due to the changing political, economic and social conditions that are thrown out into the market from time to time. Frankly who is able to predict what an influential political figure will say or act next week or next month or next year. Most of the rise and falls were due to some smart Alex out there trying to anticipate the moves of these people before things really happen. Unfortunately, time and again, it almost always sucks in new players and throw out some others as the market rise and falls in a falling trend. Many players, who were unable to take the market gyrations would have cashed out of the market, and stayed in cash in hope to fight for another day.

Let me say this. Market gyrations are not an easy thing to stomach, especially for those who are very watchful of the market movements. In fact, many are willing to take losses and leave the market instead of riding through the market ups and downs as sentiments get hazy. Along with the falling market, I am quite sure a number of us have this floating thought “I would rather take a small return of even 1-2% to protect my capital than to see my capital dwindling with time.” That precisely became the guiding principle that drives their action. So, instead of staying liquid after cashing out, they choose to put the money into more certain investments. They gladly put their money in longer term plans, such as fixed deposits and Singapore government bonds and even insurance plans that can only yield rewards (if there really are any), at least, 1, 2 years or even a few years down the road. I mention this because I happened to see some posts in social media lately. Some people seemed to have decided to take this course of action. Frankly, this was exactly the mistake that I made 20 years ago. 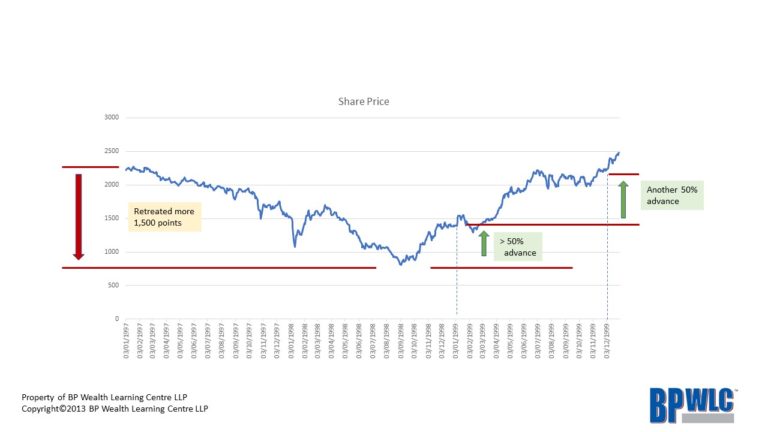 For at least 2-3 years leading to the peak of the Asian Financial Crisis, the market (STI) had already been retreating. As a rookie who had never seen a long-drawn market retreat, I was holding out very hard in hope that the market would turn around. It never did. It was down and down. Then, suddenly, the stock market fall started to gain momentum, as the Asian Financial Crises started to bite. That was the time I caved in and sold out. Instead of holding the much smaller sum in cash, I put them in fixed deposits. That appeared to be the wisest thing to do at that time. Between a steep falling stock market and a high fixed deposit (FD) rate of 5%, it was almost a no-brainer to put the money in FDs. The reason for the relatively high rate was that liquidity was drying up as the neighboring countries were battling to stamp the falling value of their currencies due to massive currency outflow. Along with the falling currencies, stock markets were retreating at an accelerated pace. My naive thinking was this – one year is not a long time, and hopefully by then, the market would be calm again for us to re-invest. Meanwhile, we should let the money work hard for us by channeling it to an avenue that yield the highest possible return.

What was the lessons here? Cash is king during a crisis. So long as it is not invested, cash remains as cash. Cash is no longer the king when the crisis is over. Count ourselves lucky if we had sold out before a huge market fall. But we need to re-invest at the right time to make significant gains. In other words, we need to be right twice, to time the selling correctly and to time the buyback correctly. When it is too late, just ride through. It’s the matter of the survival of the fittest. In fact, consider to invest more if you have the means. You may have the last laugh.

Disclaimer – The above pointers are based on the writer’s personal experience. They do not serve as an advice or recommendation for readers to buy into or sell out of the market. Everyone should do their homework before they buy or sell any securities. All investments carry risks.

Once again, this article is a guest post and was originally posted on BrennenPak‘s profile on InvestingNote.

We’ve also previously posted a nice infographic on Demystifying Derivatives which we think you’d like and find valuable over here.