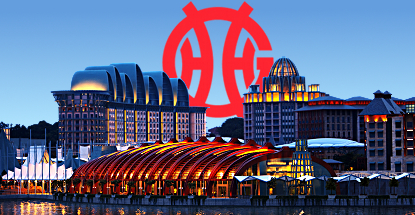 The redevelopment is expected to cost Genting approximately $4.5b over the next 5 years, and will be funded by internal working capitals and/or borrowings.

The current moratorium expires in February 2022 where Genting currently pays taxes on the Gross Gaming Revenue – 5% taxes for premium gaming and 15% for mass gaming.

If you’d like to read more on the applicable taxes application, you can read the website from IRAS Here.

The new 10 year moratorium will subject the IRs to tiered taxes between 8% to 12% for premium gaming and 18% and 22% for mass gaming so there will be downward impact to the NOPAT.

While this is a regulatory risk that Genting has to take in, I believe they have the ability to lobby against the regulators because this will impact the overall tourism sector of Singapore. I trust that the Singapore government will not want to kill their own goose that helps them lay the eggs they need.

The share price of Genting falls to as low as 96 cents today, which is about 9% drop from yesterday closing. 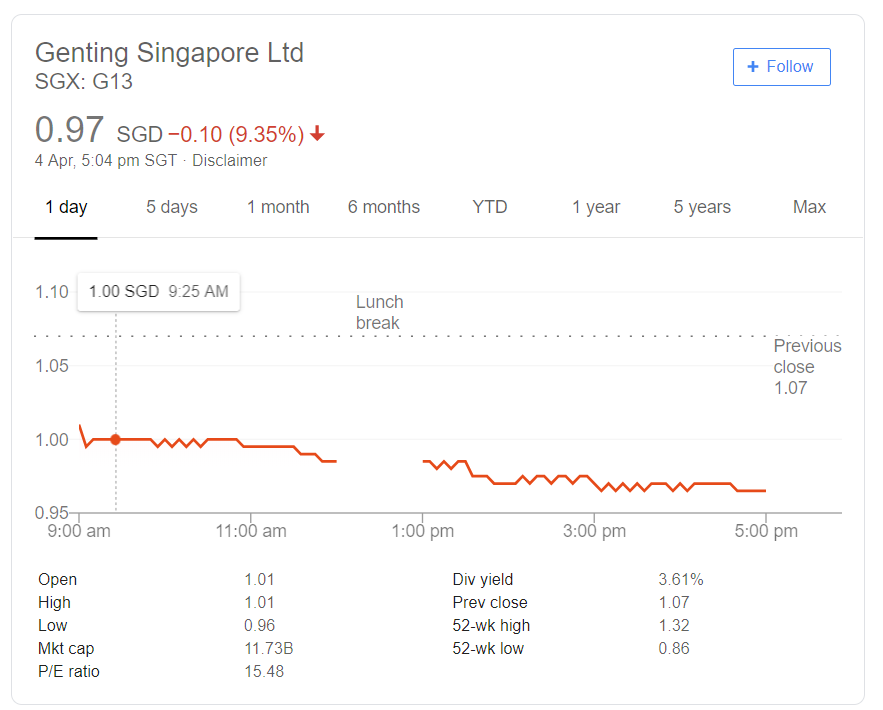 Based on market movement today, it doesn’t seem to take this news well for a number of reasons.

First, it is almost certain that Genting will go back into net debt territory by borrowing to fund the capex on this redevelopment. One of the main reason is because they would want to conserve a good amount of cash in their book for the Japan resort bidding and they have to show that their current liquidity can support that.

Borrowing is not necessarily a bad thing if the intention is to support growth capex and Genting is doing that.

In fact, if we rewind the story, this is similar when they first won the earlier IR bid to develop Integrated Resort Sentosa back in 2007 where they had to spend $5.2b between 2006 to 2010 before going operational in 2010.

They funded via internal borrowings and within 4 years after operational in 2014 they went back into net cash position. (see my previous article spreadsheet).

That’s how strong their cashflow is.

Based on similar prospect, it will take approximately 4 years after operational for them to break-even on the $4.5b.

Majority of the $4.5b will be capex, so we will only see the effect of depreciation on the P&L after the project has gone operational in 2025.

Investors should not expect any bump up increase in the dividends payout during the interim but based on past historical management has been pretty generous with the corresponding increase in payout.

I tried to run a DCF simulation to see if the subsequent increase in cashflow from the expansion is worth the amount of capex they have to pay.

But first let’s see what happens to the cashflow when the original IR went operational in 2010.

What I wanted to show here is that while the upfront capex is high, the maintenance capex thereafter is minimal once they started to run operationally. This leads to a copious amount of cashflow exponentially being generated from 2011 to 2018.

The hardest part of this exercise is to forecast the cashflow for the next 10 years, which we had to brew in certain assumptions on the variables.

Here’s some of the assumptions I’ve used:

This is what you get.

Then, I tabulate and tally the total cashflow in the next 10 years and then use the NPV formula in excel to discount it to the present value using the discounted rate between 7% to 9%.

I add back the current net cash position they have in their book (i.e $3.3b) to get the equity value.

I divide the following by the outstanding number of shares (12,094,027,000) and I get my intrinsic value of the company.

What the table below is saying is that if you discount them using 8% wacc and assign a multiple earnings of 18x PER, then you get a target price of $1.26. Obviously, the more ambitious you are on the earnings multiple and lower wacc used, the higher value you are going to get.

I have a strong feeling that this is work of a shortist in play.

Neither the tax impact nor the levy increase are significant enough to bring it down like that.

I wonder if we will see similar reaction if they are awarded the Japan bidding.

If you are investor waiting to get in, I think patience is key simply because their growth won’t materialise that fast anyway.

Meanwhile, I want to ensure that I am paid well enough for waiting.

Back envelope calculation shows that at 3.5 cents payout, a 4% yield would point out to 87.5 cents.

If you want more margin of safety, you can wait until the fcf yield is above 10%. That is pricing it at 84 cents.

I think that is good enough margin of safety and would be my preferred entrance point to make a conviction buy.

Other than just stock discussions, we also have other channels like FX, Personal Finance discussions as we mentioned here.