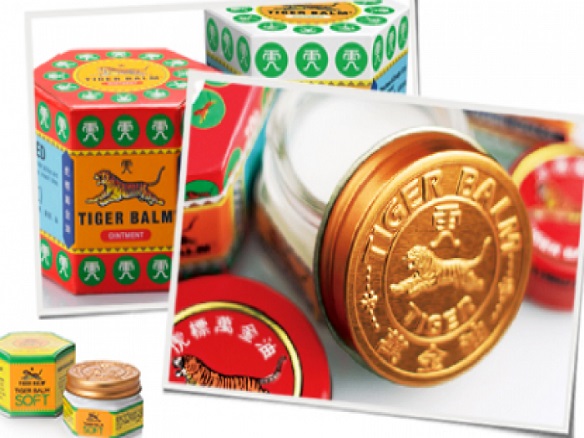 —
This column is jointly written by @fayewang, @calvinwee and @gordon_ong.
-Faye is both a fundamental analyst and economist by nature. She is a global thinker who’s open-minded and enjoys learning from the market.
-Calvin is a fundamental analyst at heart and an ardent disciple of value investing. He relishes the process of searching for undervalued stocks and enjoys collecting dividends from his stocks.
-Gordon has a demonstrable interest in equity investments, financial markets, and negotiating deals. As @NTUInvestmentClub president, he has an understanding of what factors drive an organisation’s success.

Brief Background:
Haw Par Corporation Limited is engaged in manufacturing, marketing and trading healthcare products; providing leisure-related goods and services, and investing in properties and securities. The principal activities of the Company are licensing of the Tiger trademarks and owning investments for long-term holding purposes, the history of the brothers Haw and Par traced back to the 19th century. The company distributes its products in the Americas, Africa, the Middle East, Asia, Australasia, and Europe.

Performance Summary:
Haw Par recorded a dip in profit from operations and investments of 2% mainly attributable to lower dividend income from investments. However, it should be noted that all operating segments generated higher profits in FY16. The healthcare business segment continued to contribute significantly to the Group’s revenue with a 16% increase in revenue from $152.6 million to $176.4 million. Correspondingly, healthcare’s profit increased 37% from $48.1 million to $66.1 million with higher sales and reduced operating expenditure. However, revenue from the leisure business segment registered a sharp drop of 34% to $8.4 million due to the closure of Underwater World Singapore (“UWS”) in June 2016. Therefore, leisure recorded profit of $0.9 million in FY16 compared to loss of $4.3 million in FY15 due to the one-off impairment charge in fixed assets of UWS in 2015. 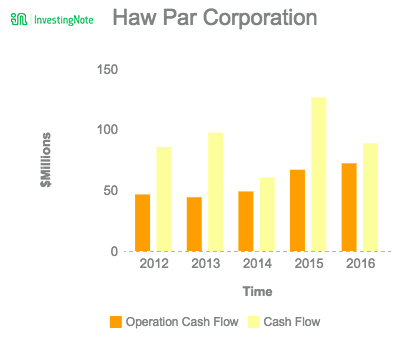 1. Operating performance
Haw Par Corporation’s revenue has increased steadily since 2012, and this is also reflected in its profit before taxes. However, PBT decreased slightly by 1.6% yoy due to the lower dividend income received from investments. In that light, it should be noted that all of its operating segments generated higher profits yoy, however the profit contribution from Investments dropped by 31%, leading to an overall decline in PBT.

2. Financial & cash position
Haw Par’s Operation Cash flow recorded yoy increase since 2012, and FY16 was no different since it reported higher profits across all its operating segments. However, there was a sharp drop in its total cash flow by 30% yoy. This is attributed by the decrease in financing cashflows by $24.8Million. Correspondingly, it recorded a fall in the lower cash and cash equivalent in the balance sheet by 0.51% yoy.

3. Segment performance
Traditionally, Haw Par Corporation derives its revenue from the investments income segment. The overall group revenue for FY16 at $201.6 million grew 13% yoy, with Healthcare and Property recording 16% and 25% increase in revenue respectively. Operating segment profits before interest expense and tax for Healthcare and Property grew 37% and 22% respectively. However, investments income decreased 31% due to lower dividend income from investments.

4. Stock information
Haw Par Corporation has a very low D/E ratio of 2%, hence it can raise additional financing if they wish to acquire more assets in any of their business segments. On the other hand, Haw Par does not have a remarkable ROE and ROA, hovering between 4-7% from 2012-2016. This is likely because most of its business segments are in the mature stage and have limited growth potential.
However, it should be once again noted that it derives most of its revenue/profits from its interest in UOB, UIC and UOL group, hence its overall profits is highly dependent on the performance of these 3 companies. Haw Par has a dividend yield 1.9% for FY16.
We were unable to find a comparable company for Haw Par Corporation in the SGX stock universe, hence, we decided to skip the peer analysis for Haw Par Corporation.

Strengths:
1. Renown of brand. Brand of Haw Par retains a history over 100 years that can be traced back to 1920s. With famous Tiger Balm as its representative product, Haw Par held competitive advantages of competition in the healthcare industry considering exceptional brand awareness. Despite the long history, Tiger Balm became iconic for the sake of its incorporation in Singapore traditional culture. Brand loyalty is another benefit from well brand management. It is brand loyalty that become a significant obstacle for new entrants, as they may fail in the competition due to strong brand loyalty of customers to existing players.