The liquidity and Network Flywheel effect is key to unlock business growth and expansion. This post was originally posted here. The writer, Brian Halim is a veteran community member and blogger on InvestingNote, with a username known as @3Fs and has 2259 followers.

One of the most important elements of a tech platform business model is the ability to create multiple expansion network effects, using the Network Flywheel concept.

A network effect is often described in economics and businesses as one of the key pillars of success as it depicts a contagion behavior of one additional usage of products or services that will have on the next users. This creates a long-lasting effect and an increasing value of a customer’s lifetime value, which is one of the key unit economic metrics for a business.

The Internet is clearly the easiest example of the network effect, where everything in our daily activities flows through the web channel.

Let’s take a look in more detail by using a private ride-hailing network, Grab as an example.

Grab started out as a ride-hailing platform where it aims to create a large pool network of supply and demand in each market so they can have what is called the network liquidity flywheel as depicted in the graph I created above.

First, it has to create supply by bringing in private vehicles and drivers that are willing to do the job. They have to entice drivers with incentive and attractive commissions so there is enough pool of drivers to meet the incoming demand later on.

The network also becomes exponentially more efficient with more supplies a.k.a drivers on the road.

The more drivers signed up in different areas of the network or cities, the lesser the time required for each matching to happen.

Next, the company creates demand. This is usually done by giving out massive incentive discounts through promo code that the passengers can use.

I recalled Grab did this for a good couple of months back then just when it has entered Singapore.

The promo codes that they dished out to consumers are all costs to the company, but they are being redirected and evaluated through the retention and lifetime value of a customer, which likely yields them a greater amount of ROI in the long run.

The network flywheel cycle repeats and every node that they bring to their platform, it increases liquidity, drivers, carriers, and consumers.

In fact, they are so successful at this that they are now expanding their network liquidity flywheel not just for ride-hailing but also for payments (through Grabpay) and they are also in the midst of applying for the digital banking license.

This network liquidity flywheel has also worked extremely well for e-commerce companies such as Shopback, Lazada, and Fave. 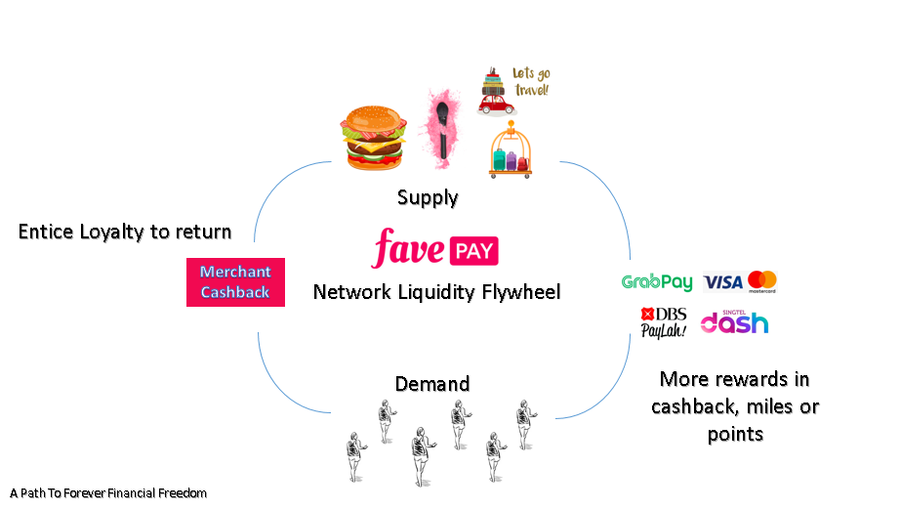 Let us turn our attention to a digital payment enabler company, Fave, for instance (which I’m more familiar with, don’t ask me why).

The key tenet of the business model lies in getting a wide variety of supply and services to its platform and encouraging them to provide cashback to its consumers to entice loyalty for them to come back and visit again the next time around. While this lowers the business profit margins that the merchant is earning, the concept of a network liquidity flywheel as consumers tend to return to utilize the cashback is highly valuable to the business.

The company can also do more to scale and expand the demand network through some user acquisition activities such as providing better support or providing more cash back to consumers.

From a consumer’s (demand) point of view, they will also stand to benefit from the cashback given from the merchants as well as cashback or points that are awarded when they transact via the respective payment methods such as Grabpay, Paylah, or Dash wallet.

This creates a vicious powerful flywheel cycle and an enormous customer’s lifetime value in the key unit economy (LTV).

You replicate this model across multiple different markets and you get the idea of how powerful the whole thing is.

This network liquidity flywheel effect literally applies in Investing as well, causing market valuation to expand and share price to rise ahead of future growth and optimism.

When a business is doing well – such as during a boom cycle in the industry – the company will report strong earnings which leads them to budget and incur a higher amount of future CAPEX, hire more staff and expand into other markets or divisions.

Because of this, inflows of funds from both institutional and retail start to pour in an exponential fashion, leading to buying pressure that pushes up the valuation of the company. Most analysts would also start revising their financial models leading to a favorable re-rating for the company, further pushing up optimism.

A good recent example of such a case is IFAST Corporation (SGX: AIY).

The source below is using the “Fundamental Scorecard” which I find pretty convenient to filter and identify strong uptrend stocks in favor. 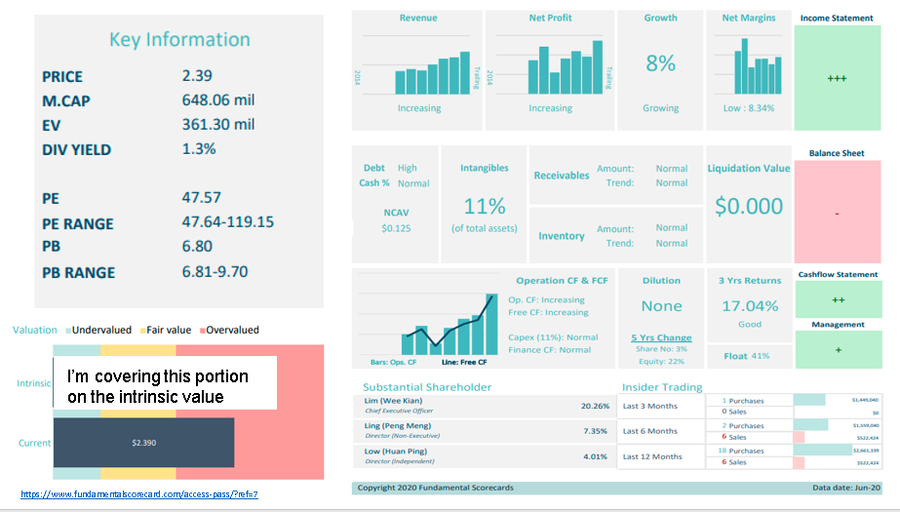 IFAST Corporation has been on a tear run this year alone, rising by close to 300% since the start of the year.

The popular thesis case for the rapid growth of the fintech industry has been gaining plenty of traction in the past recent years, as these industries seek to disrupt and digitalize the wealth management industry. The Covid-19 situation has only pushed the flywheel case even more apparent than ever.

In the analysts’ coverage from UOB KayHian, the report pegged the company’s valuation to 40.3x FY2021 PER, which is a 2SD above its 5-year mean. IFAST’s valuation currently trades at 33.9x forward FY2021 PER, so there’s clearly an elevated level of optimism and future growth being priced in.

This flywheel effect can go on for months, and even years – as the case for Tesla would have made a few of us turn millionaire if we had believed Elon’s story.

The same effect can be said to the bull market for crypto-currency before they had a major crash in the early part of 2018.

Network liquidity flywheel has an enormous potential for both business owners and investors to take advantage of.

They are the juggernauts in the whole tech ecosystem that makes them so powerful because of the ability to create waves, expand and gain market share in the shortest amount of timespan.

In a world where we are so connected to one another more than ever, the impact of the network flywheel system has become more important so than ever.

This also probably justify why some companies are valued at an extreme which traditional value investor can never understand.
Thanks for reading.

Once again, this article is a guest post and was originally posted on Brian Halim‘s profile on InvestingNote.