Will MM2 Asia benefit from the reopening of the economy? This post was originally posted here. The writer, James Yeo is a veteran community member and blogger on InvestingNote, with a username known as @Smallcapasia and has 905 followers.

MM2 Asia is benefiting from the latest announcement of the Government’s green light to allow more patrons in cinemas. On 23 September 2020, the government announced that from Oct 1, large cinema halls with more than 300 seats will be allowed to admit up to 150 patrons in three zones of 50 patrons each.

On the other hand, smaller cinema halls will also be allowed to increase their capacity to 50 percent of their original operating capacity or maintain the current limit of up to 50 patrons per hall, subject to safe management measures.

For Cathay Cineplexes’ parent company – MM2 Asia, it would have breathed a sigh of relief that the worst is probably over as they can welcome more customers.

But that being said, the Cathay cinema is just 1 division of MM2 Asia as the latter owns many more integrated businesses across the content, immersive media, event, and concert industries across Asia.

mm2 Asia is a leading producer of films and TV/online content in Asia. As a producer, mm2 provides services over the entire film-making process – from financing and production to marketing and distribution, and thus has diversified revenue streams.

The Group’s primary business activities are:

By now, we would have known that mm2 is facing a dearth in revenue as everything comes to a near standstill during the pandemic.

Let’s take a quick look at its FY2020 revenue. Investors need to take note that the Financial Year 2020 ends 31 March 2020. Hence, the real impact of the lockdown in Singapore from May to August is not reflected in mm2 Asia yet. 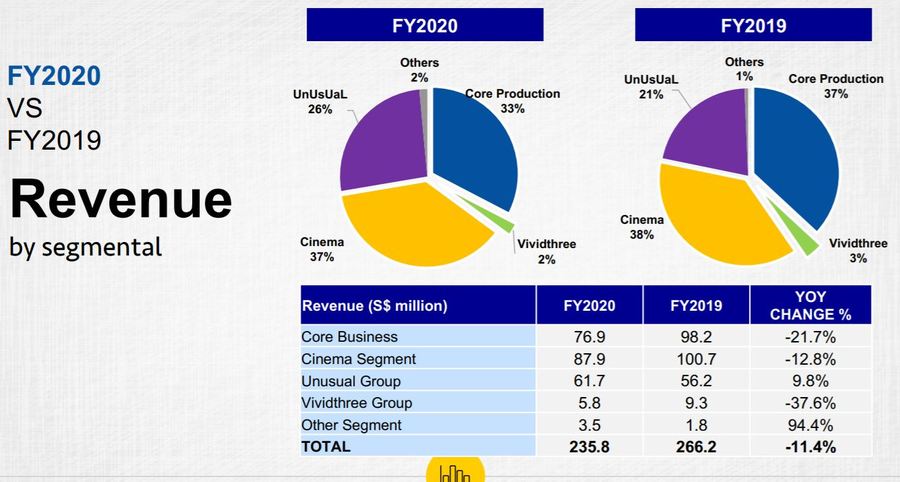 To shed more light on this, we took a look at its total revenue breakdown by segments. As seen from the above, its Core Production Business and Cinema segments are suffering from the dip in revenue while UnUsUaL Group reported a 9.8% YoY increase to S$61.7 million.

Given that the 3 segments are the main pillars of mm2 – constituting a total of 96% for its FY2020 revenue. With that, we will touch on these 3 pillars and how they are performing thus far.

Mm2’s core business is on content production, distribution, and sponsorship. One big part of it is movie productions.

On that front, if you head over to their website – mm2entertainment.com, you will find many Asian-focused movies. Apart from their flagship ‘Ah Boys to Men’ movie series in the past, a few other notable ones include:

According to Mm2’s presentation, it has a strong pipeline of movies slated for release and the productions are spread across markets as well (so not only Singapore). On top of movie production, there’s growing B2B demand and increased government projects too.

Next up, the Cinema segment is one that possesses a significant presence in Malaysia and Singapore.

Due to the Group’s acquisition of assets from Cathay Cineplexes Malaysia, Lotus Fivestar Cinemas, and Mega Cinemas, the Group operates mmCineplexes, the Group’s cinema brand, with 133 screens across 18 locations in Malaysia.

Whereas in Singapore, the Group operates 64 screens across 8 locations under the brand “Cathay Cineplexes Pte. Ltd.”.

Mm2 investors would be glad that the Singapore government has allowed for cinema halls to increase their capacity from Oct 1 onwards and the Malaysian side has already re-opened cinemas from 1st July.

Based on my quick assumption, there would be strong pent up demand from movie-goers due to everyone being locked down in their own countries. Hence, this segment should be pretty insulated going forward provided that the Cinema halls can return to full capacity again.

For a quick background, UnUsUaL Group is a big-scale event/concert organizer. The company provides services in staging, Sound Light, and Visual (SLV) for an event and a concert.

Although UnUsUaL may be the last to go back to the norm in this pandemic, there are several impending catalysts. A couple of silver linings are that live concerts are already on-going in Taiwan and shows are moving online such as BTS’s live concert ‘Bang Bang Con’.

You can also read more about it here. To add on, UnUsUaL has an asset-light and relationship-based business model. This allows the firm to be in a good position to swerve through this prolonged crisis.

The current unprecedented situation warrants a look at its past EPS numbers during the glory days.

And assuming we tag a 15x P/E ratio, the expected share price will become S$0.24 or around 38.7% potential upside although it hinges a lot on the reopening of the economy in time to come.

For the company’s outlook, I took an excerpt from their latest FY2020 results:

Recognizing the increasing demand for Asian content, the Group’s strategy remains focused on North Asia. With a strong presence and proven track records, the Group will continue to produce more projects in these markets.

In addition, the increasing number of platform providers has resulted in an increase in demand for quality content. The Group will continue to strengthen its content creation capabilities to cater to these platform players, both broadcast networks and streaming service providers (OTT), based on a B2B business model.

The Group foresees a pent-up demand for out-of-home and live entertainment after Covid-19 lockdowns ease. This coincides with its original pipeline with most shows planned for the second half of the financial year.

The magic and draw of the movie-going experience are unparalleled and the Group remains optimistic about the cinema business over the longer term.

Executive Chairman of mm2 Asia, Mr Melvin Ang also shared that their “core content business and other investments are on track, particularly in the North Asia markets and some new markets in South-east Asia”.

In addition, mm2 has to redeem the S$50 million bonds – S$50m MMASIA 7.000% 27Apr2021 Corp (SGD) in April 2021. With a cash position of S$29.4m, mm2 has to think of ways to plug the gap within 6 months’ time. The economy reopening can be a saving grace for mm2 to renew their debts as they maneuver past the tight liquidity situation next year.

All in all, the uncertainty surrounding COVID-19 has caused a significant impact on the entertainment industry because it literally thrives with huge crowds be it concerts/movies/events.

The immediate thing for mm2 is probably to rectify the refinancing risk and ‘survive’ through the resurgence of virus cases and await for the vaccine for things to return to normalcy soon.

Once again, this article is a guest post and was originally posted on James Yeo‘s profile on InvestingNote.