This post was originally posted here. The writer, Brian Halim is a veteran community member and blogger on InvestingNote, with a username known as @3Fs and has 2,000+ followers.

I thought I’ll pen down my thoughts after receiving a number of emails this week from various sources asking for guidance on two big China cap names – Alibaba and JD.com – both of which have seen shares plummeting each day for the past few consecutive weeks.

Many readers would also know that I own Alibaba shares from my last monthly update and have also recently written a piece on JD analysis so it’s something which I’ll walk the talk. This is probably the most hated large cap company right now in the entire planet.

The entire saga started when the intention to list Ant IPO was shelved and the State Administration for Market Regulators went to investigate the entire company’s holding structure.

Since then, the State of Administration has concluded by fining the company US$2.8billion – which the company chose to take in the Q4 FY2021 report announced last night.

The entire saga has shed the company 37% (more than 1/3) of its market cap from the peak – which in my opinion is a bit overdone. The RSI indicator confirmed the same by showing that the counter is currently in oversold territory.

If we look at the results announced yesterday, total revenue for the quarter was RMB 717 billion, an increase of 41% year on year.

The growth was driven by robust revenue growth of the China commerce retail business (Taobao, Tmall) and the continued growth of its cloud computing business.

Total adjusted EBITDA was RMB 170 billion, which is an increase of 24% year on year. There was the one-off adjustment from the anti-monopoly fine which was taken in the quarter, so it pushed the net comprehensive income for the quarter to negative loss territory.

During the conference call held yesterday, management has reiterated its intention to continue investing in R&D and also new seed of businesses such as Taobao Deals (which aims for the lowest of the market segment tiers), Taobao Grocery, Freshippo supermarket (which is the community marketplace business) and new features on the core platform such as Taobao Live and short-form video. The company is also enhancing its logistics arms, CaiNiao to give its competitors such as JD a good run for their money.

From a quick envelope valuation perspective, Baba is trading at 6x Price to Sales FY2021 multiple, and a 4.7x forward FY2022 sales multiple. That’s very cheap in my opinion for a company that has the upper hold of connecting all the industries in China.

On top of the current 300 shares I have owned for Baba at an average price of about USD230, I also have a couple of put expiring in between $210, $200 and $195. It is likely that I get assigned for my puts for this week and the next couple of months ahead if we are seeing further weakness so I am letting it sit and come to me instead. If I managed to get assigned all of them, I would have around 600 shares at an average price of $215 by the end of August – which I think is a really solid entry point in the long run.

From a chart perspective, Baba has broken through each and every support line in the past few weeks. I think we’ll likely see $198 being a strong support barrier before the next strong support at $180 which will revisit the March low in 2020. I hardly doubt though that they will reach $180 at this point so I won’t bet them to reach there if you are planning to make this your long term investment. 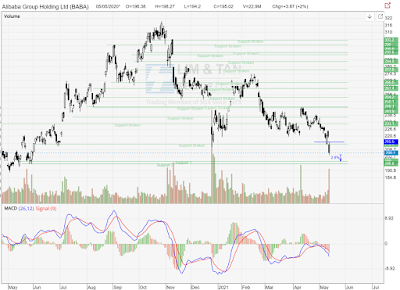 JD.com is a company I’ve just written a week ago so I won’t repeat much of what I have said.

Since the article last week, JD has plummeted 10% further to around $67, which is a price I have assigned for my worst case scenario. I do really think that like Baba, there is a good potential for a re-rating once all the pessimism has been buried.

At this valuation, the company is trading at only 1x Price to Sales, and a forward 0.7x FY2022 sales multiple. If you compare that across all the valuations that you currently have in the US market (big or small), you’d know how cheap the market has been rating JD is at the moment.

While I do not previously have a position for JD, I do have put contracts that are expiring today at $70 which I am likely getting assigned. Again, I think it is a very solid entry which I will start building up my positions so I have also started selling put options at the various $67, $65, and $60 levels over the next coming months.

JD’s RSI is currently in an oversold territory – albeit only 29 at the moment so it can fall deeper but I see every drop as a good opportunity to add positions into the market at this level.

From a chart perspective, there is some good support at $65 from the previously resistance turned support in back in July so we might be able to visit that pretty soon. 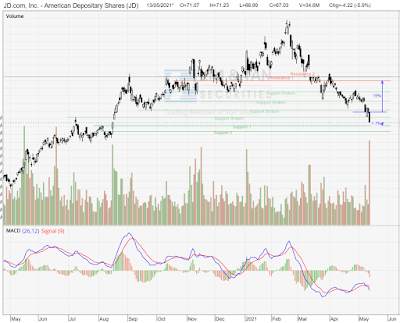 Many of the indices underwent a correction this month so like many of you, we are feeling the pinch when we see our portfolio goes down.

But in moments like this that we get to pick up some really solid opportunities for winners in the market and I am confident that this will make a case for a stronger run once the sell-off is over.

If you need a reminder on why you should be buying the dip on great companies, you can look no further than what happened in the market last year and see where those companies are today.

Patience is required for those who’s willing to wait and I think it will reward handsomely when it does.

Thanks for reading.
Once again, this article is a guest post and was originally posted on @3Fs‘s profile on InvestingNote.