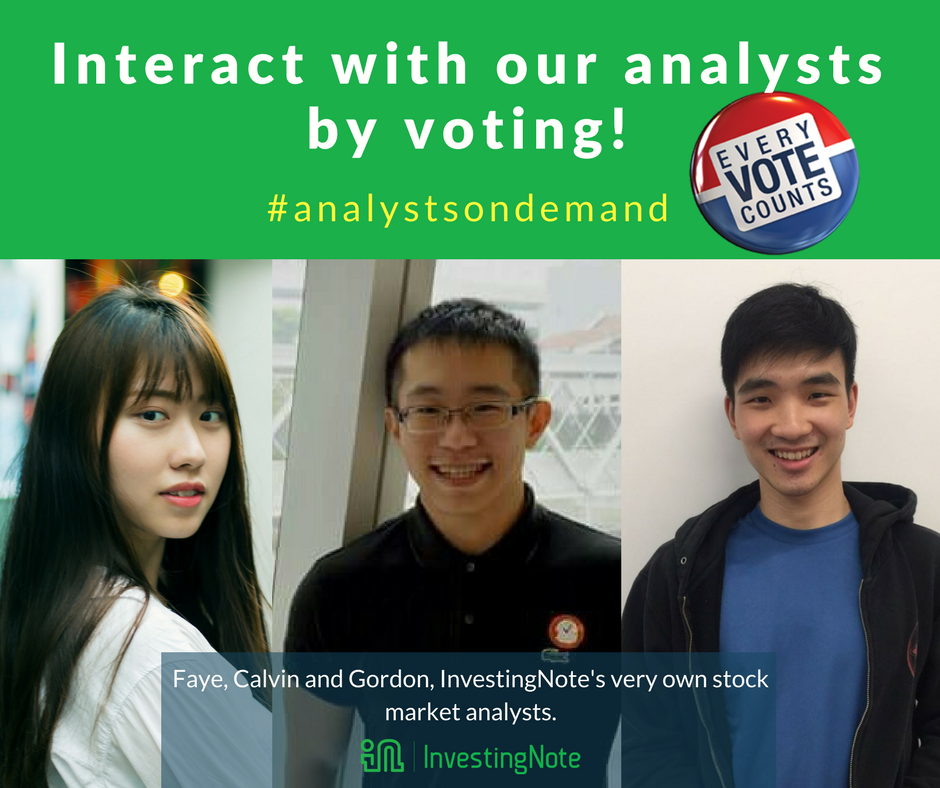 -Faye is both a fundamental analyst and economist by nature. She is a global thinker who’s open-minded and enjoys learning from the market.
-Calvin is a fundamental analyst at heart and an ardent disciple of value investing. He relishes the process of searching for undervalued stocks and enjoys collecting dividends from his stocks.
-Gordon has a demonstrable interest in equity investments, financial markets, and negotiating deals. As @NTUInvestmentClub president, he has an understanding of what factors drive an organisation’s success.

Together, they are your analysts on demand!

If you like this column, please start voting which of these 3 stocks you would like them to write on in their next article! This is your chance to interact with them and they will write on the most voted stock of your choice!

How to vote: Comment the stock of your choice: either Hyflux, Chews or Thaibeverage. The most number of likes/comments by the end of the day will be chosen. It’s that simple!

Voting starts now and ends at tomorrow (16 May) when market opens (9am)!

Disclaimer: this article simply provided analysis on stocks from the fundamental perspective, it does not represent any buy/sell recommendation from Investingnote. *All the dollar unit ($) in this article refer to SGD.
— 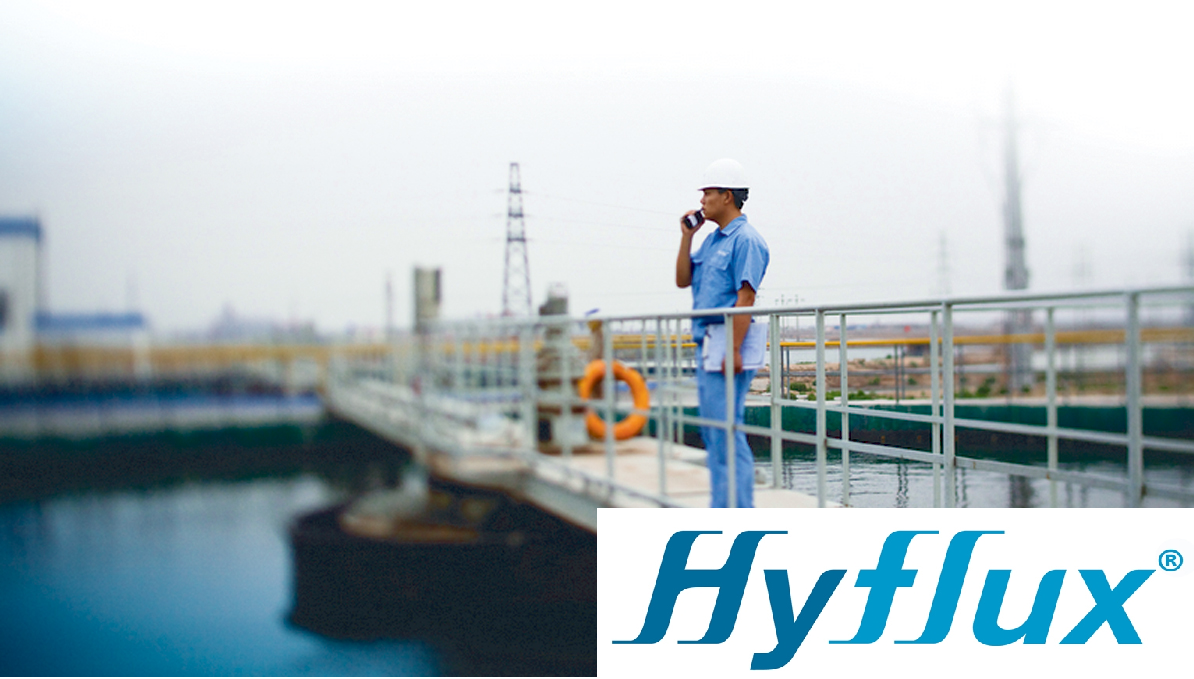 1. Brief Description
Hyflux is an integrated water and energy solutions provider that specialises in water treatment and desalination. It builds desalination plants, integrated water and power plants and membrane production. Recently, it has expanded to waste-to-energy via securing the TuasOne project. It serves both municipal and industrial needs, with the bulk of its revenue coming from municipal. It has landmark projects located in Singapore, China, Saudi Arabia, Egypt, Oman, and Algeria.

2. Overall performance for the past 5 years 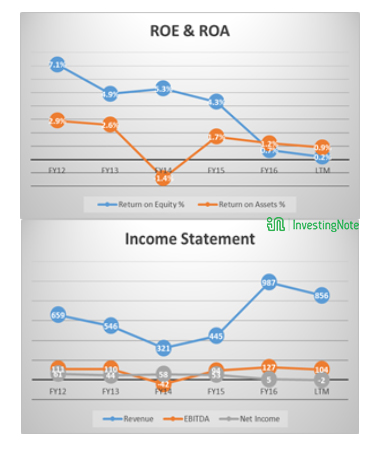 While Hyflux has successfully won many new contracts in the Middle East in FY16 boosting top-line revenue growth, higher staff costs and direct costs from EPC have led to worsening profit margins and stagnant EBITDA. Higher financing costs due to repeated borrowings and lack of CCE also contribute in the lower Net Income, ROE and ROA. Moreover, the weak Singapore power market is affecting their plant operations’ profitability. 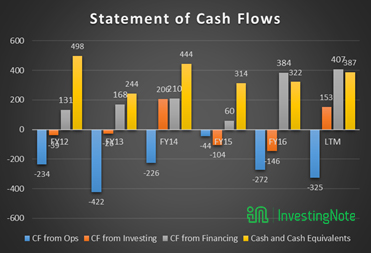 Hyflux’s cash flow from operations have been consistently negative throughout the past 5 years. Hyflux has been raising capital by issuing long-term debt, mostly through perpetual bonds. Can be seen from the graph that Hyflux is barely managing to sustain its cash reserve through debt financing. Its cash reserves only rebound whenever there is a debt issue. However, this has the detrimental effect of raising the cost of capital for their projects. Most of their debt is long-term debt. Hyflux’s D/E = 112.3% and EBITDA/Interest Expense = 1.6x.

Its recent divestments and “asset-light” strategy are motivated by their negative operating profit for some projects, steadily declining CCE and need for capital for CAPEX in their asset-heavy business. Hyflux recently sold their Innovation Centre and 50% equity stake in the Galaxy Newspring portfolio, thus the influx of cash in FY17Q1. Hyflux is currently selling Tuaspring plant (Tuaspring) and divesting its full interest in the Tianjin Dagang desalination plant in China. It remains to be seen whether Hyflux can channel this capital into higher IRR projects.

3. Business Segments overview
As of FY2016, 92% of its revenue comes from municipal, while 5% comes from industrial. While no breakdown between Engineering, Procurement and Construction (EPC) and Operations & Maintenance (O&M) revenue is explicitly stated in the financial reports, its order book can give a hint to the rough breakdown of revenue from the two sources. O&M is roughly 60% and EPC is roughly 31%. 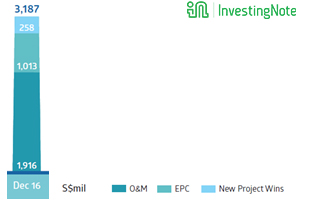 On the other hand, O&M have suffered due to prolonged weakness in Singapore’s power market. Nevertheless, O&M remains a high and stable source of revenue. Government’s political strength and willingness to increase water prices and possibly increase electricity tariffs can be a significant upside to Hyflux’s revenue.

5. Conclusion
Hyflux is in the midst of its international growth plans. However, it is running into problems with operational cost-control (raw materials and staff cost) and financing. One saving grace is its ability to secure contracts especially in the lucrative water-scarce Middle Eastern market, evident in 2016. It remains to be seen whether Hyflux can successfully divert its resources to more profitable projects, while maintaining its leadership and technological advantage in desalination amidst growing competition. 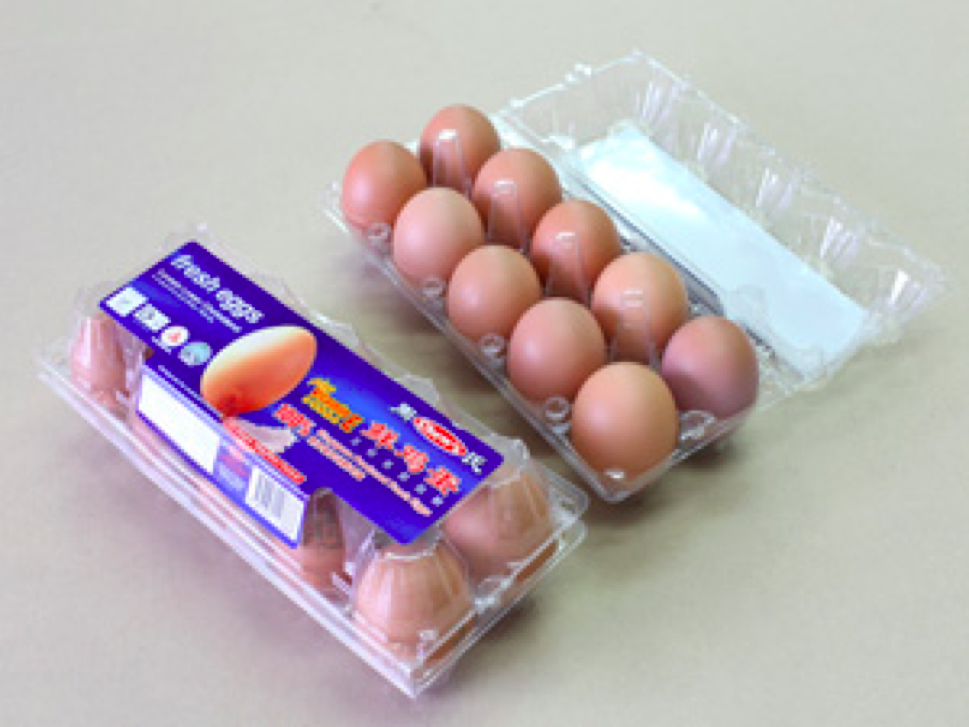 1.Brief background
Chew’s Group is a leading company that produces and sells fresh eggs in Singapore and China. It supplies about eight percent of Singapore’s egg consumption.
It’s core businesses includes
1. Designer and generic eggs
2. Liquid eggs
3. Spent grains
4. Food Processing
5. Aqua culture
Since its founding in 1975, Chew’s Group has become synonymous with high quality eggs in Singapore and maintains a strong presence in the local food and beverages chain and leading supermarkets.

Chew’s Group continued to deliver stable results amidst the challenging global economic climate. ROE and EPS are highly inflated due to the sale of land use rights to the government while dividends remained stable at 0.49 cents/share. With the acquisition of new site that will be ready in May 2019, the daily production will increase to 580,000 eggs and possess capacity for expansion to meet future demand. Moreover, with the completion of the chicken soup factory, Chew’s Group has started to sell its chicken soup products via a supermarket chain and is in negotiations with other supermarkets and retail distribution channels.

Geographically, Chew’s Group derive its revenue mainly from their business operations in Singapore, contributing 93.0% of the Group’s revenue in FY16.This has remained largely status quo in FY16. The operations from its Singapore business reported an 6.9% decrease in FY16 due to a fall in both sales volume and sales price.

In terms of its revenue from their product segment, FY16 has largely status quo with Designer eggs and Generic Eggs contributing close to 90% of its total revenue. 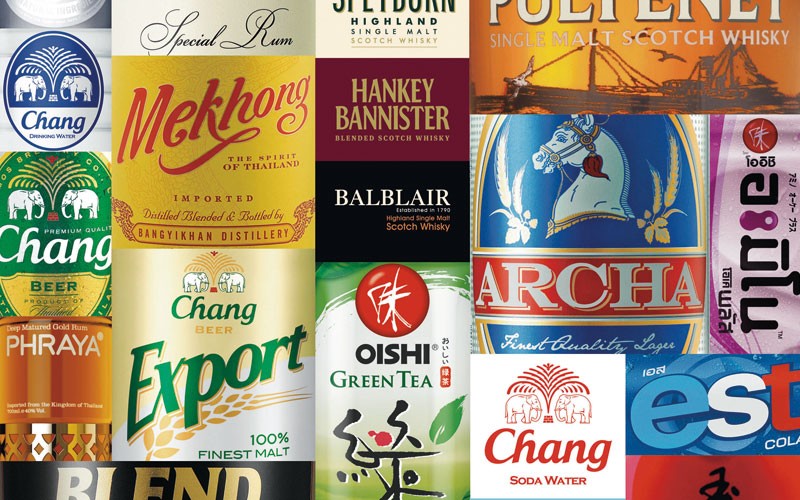 1. Brief Background:
Thai Beverage Public Company Limited is a Thailand-based company engaged in the production and distribution of alcoholic and non-alcoholic beverages, and the operation of Japanese restaurants. The Company operates in four business segments, including 1) spirits, 2) beer, 3) non-alcoholic beverages and 4) food. 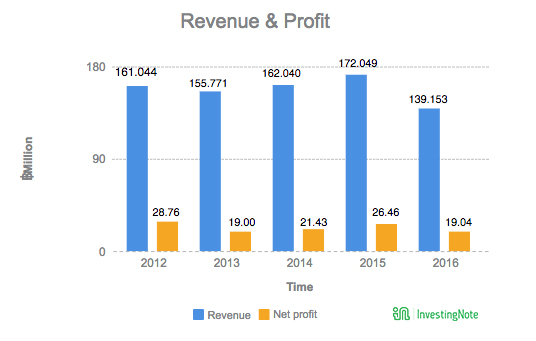 In 2013, both Thaibev’s revenue and profit suffered declines, which was mainly caused by a 39.9% decrease in revenue in the non-alcoholic beverages business. Competition within Thailand’s non-alcoholic beverage market intensified in 2013, especially in the ready-to-drink tea and carbonated soft drink sectors. Additionally, Thaibev had to deal with the termination of a production and distribution agreement with an international enterprise at the end of October 2012. Thaibev enjoyed steady growth in the three years since 2013. During this period of time, Thaibev expanded through acquisition of Fraser and Neave, Limited (“F&N”), and by launching new brands such as ‘est’ cola. They also made efforts to acquire greater market share in ASEAN.

The financial year of 2016 represents heartache for Thaibev. In October, people were in great grief and mourned for the passing of Thailand’s beloved King Bhumibol Adulyadej, and a year-long mourning period was announced afterwards. The government did not impose direct restrictions on the sale of alcohol, but called for the avoidance of entertainment events. In February 2016, Thaibev changed its calendar year end from December 30th to September 30th. Thus, the full year financial results for 2016 just cover its business results for 9 months, and the data for the fourth quarter of 2016 was missing. There was a decline of both full-year revenue and profit in 2016, mainly due to the loss of the King. When compared to the 9-month result of 2015, the 9-month figures of 2016 saw 14.8% growth in revenue but 7% decline in net profit. 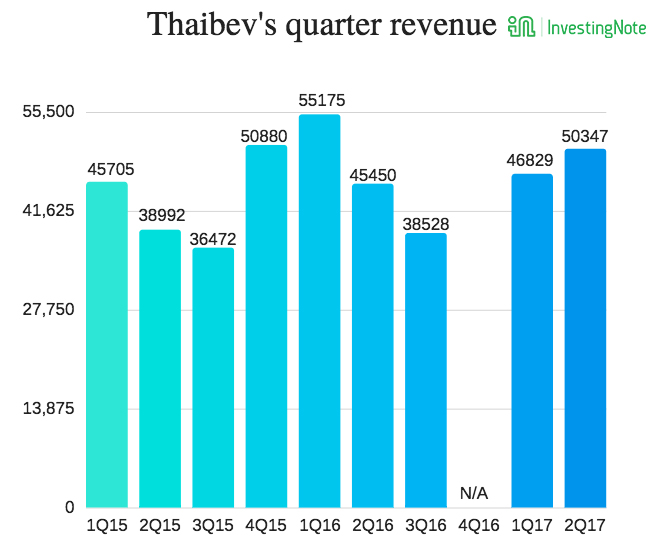 Unit: Thousand baht
Based on the quarter result, all of the first three quarters of 2016 observed better performance compared to same period in the last year. The firm enjoys 40% market share in the beer business, as the market is relative saturated, existing beverage players in Thailand boost their sale mainly by extending their product line. Thaibev introduced the Oishi Green Tea in 2016 for product diversification. The 1H17 result was less favourable than the number of 1H16 because of the lasting mourning. However, the data shown Thaibev’s sales is in the rally.

3. Segment break-down
Based on quarterly results, all of the first three quarters of 2016 observed better performances compared to the same period in the previous year. The firm enjoys 40% market share in the beer business, as the market is relatively saturated; existing beverage players in Thailand boost their sales mainly by extending their product lines. Thaibev introduced the Oishi Green Tea line in 2016 for product diversification. The 1H17 result was less favourable than that of 1H16 because of the lasting mourning. However, the data seems to indicate that Thaibev’s sales are rallying.

3. Segment break-down
Thaibev has four business segments: 1) Spirits, 2) Beer, 3) Non-alcohol beverages and 4) Food. The majority (55% in 2016) of its revenue was generated from the Spirits segment, followed by the Beer segment which contributed 32% of total revenue in 2016.

In 1H17, Spirits experienced a 9.2% decline in revenue and a 9.7% decrease in net profit. However, events like the annual Songkran festival (13~14 April) in Thailand could have boosted the sales of spirits. Also, 51.5% of its cost of sales was derived from excise tax, and according to RHB, this could be used as an excuse for raising sales prices.

Thaibev’s Beer segment showed the largest decline in net profit, with a 43.5% drop. This was due to the one-year lasting mourning period, and increased expenses on advertising and promotion.

Same as the previous year, Thaibev’s non-alcoholic beverage segment also suffered from losses in first half of 2017, but there was improvement as the EBITDA turned positive. Thaibev has made efforts in raising its brand awareness of ’est’ cola, and this is expected to help the segment bring profit to the firm by 2018.

There was a 7.3% growth in revenue from the food segment, but this business also saw a 7.9% decline in net profit. ‘Oishi’ Japanese restaurant is the main operation in this segment, and it faced fierce competition with flat growth in recent years.

4. Stock information
Current P/E ratio of Thaibev is 30.057, which is slightly higher than the average ratio of the beverage industry (30.041) and the ratio from the food industry (23.076). Earnings per share is 0.57 baht, which is 2.2% lower than from 1H16. Dividends per share is 0.20 baht. The stock price increased, demonstrated with a gap up, in Feb 15, 2017 after the release of the 1Q17 results. In recent weeks, Thaibev’s stock price was on a downward trend and experienced a gap down on May 12, after the 1H17 results were released.

5. Conclusion
In 2016, Thaibev performed well in the first three quarters, but business since October 2016 has been severely affected by the passing of the King Bhumibol Adulyadej. The one-year mourning period brought continuous negative influence to Thaibev’s sales, but the firm is in the process of recovery. Thaibev could gain further benefit from its stakes in Fraser and Neave, Limited (“F&N”) and Fraser Centrepoint Limited (“FCL”) in the near future. This company is rallying, but a little bit expensive to touch at its current price.

Cast your votes by clicking below!