John Keynes once said that the market can stay irrational longer than most retail investors can stay solvent.

In case you have not heard of the hottest town talks surrounding the market in the recent days, shares of several counters (I purposely mentioned counters rather than companies because it doesn’t matter anymore, they are treated as a pawn right now) such as Gamestop $GME, AMC, BB, Nokia, KOSS have rocketed to escalating levels due to strong ongoing retail demand pushing up the stock. Yes, you heard it right.

It’s not big institutional controlling it (though I would argue there might be small hedge funds perhaps who are participating in the party), but rather retailers who lurked around forums such as Reddits, and StockTwits nests and consolidate their purchasing power by pushing up the price.

If you theoretically take the number of forumers – Reddit/wallstreetbets/StockTwits users/followers, which is likely to amount to more than 20m, you can essentially have a coordinated orchestra to move the markets.

Retail investors, including members of the Reddit forum r/wallstreetbets, have made concerted efforts to drive Gamestop shares higher and squeeze short-sellers such as Melvin Capital. These people helped to drive the share price up as much as 145% on Monday, then as much as 95% on Tuesday.

And then, of course, you have the backing likes of Elon Musk and Chamath, who is playing around with their tweets to send frenzy followers to drive the fuel further. 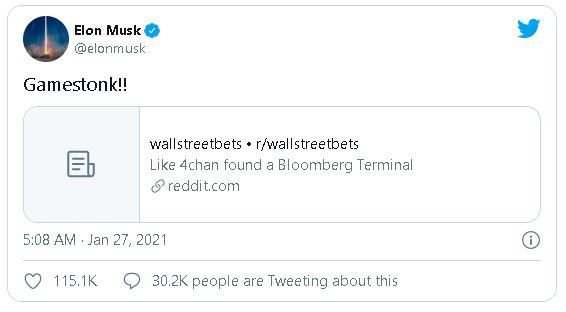 This is not the first time nor likely the last time we’ll see a case of a short squeeze and this is usually the cause of a faulty system in the trading world where regulators allow short-selling to exceed the amount of available floating shares out there, hence causing the spike when these short-sellers have to recover their position.

One of the most fascinating case study we can look back to as a precedent was back in 2008 when an event created an enormous short squeeze in the stock price of Volkswagen which briefly took the company at one point as the largest market cap in the world at that time. 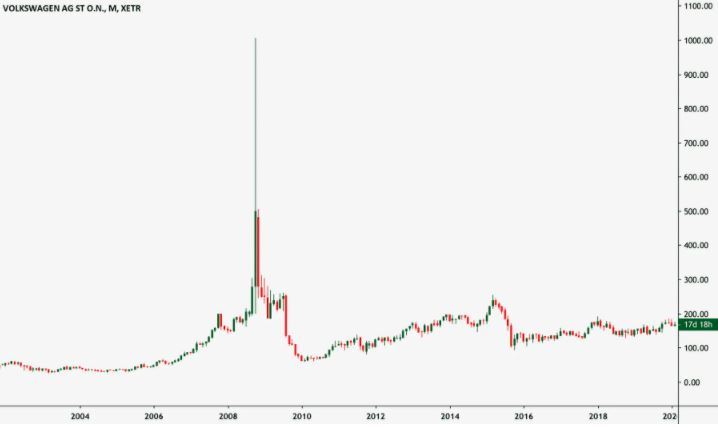 In 2008, when the world was still licking the wounds from the fallout of the Lehman Brothers, short-sellers began to target a company they thought was going bankrupt at that time – Volkswagen.

When a press release came out that Porsche was taking bailout for most of the outstanding – 74.1% of the ordinary shares using cash-settled options, plus the fact that 20.1% was already owned by the state of lower Saxony, it essentially means there are only 5.8% of floating shares available out there to “play around”. It was mathematically impossible for every short-seller to cover their positions.

The massive squeeze fueled the share price up to EUR999 at one point, briefly making Volkswagen the largest company in the world until the price went back all down again and only settled by December 2018, taking the whole sage up and down in a period of 2-3 months.

There was big wealth distribution – some became a millionaire, some hedge funds went on liquidation, while there are probably some who went on “harakiri” mode.

How Do You Position for Gamestop?

The best advice is to probably sit away, especially if you are a relatively new beginner in the market.

If you are someone who’d like to go long on participating in the current run, it is best to position via a long call option than a straight direct long as you limit the amount of loss with the premium you are comfortable to lose. Then you can ride the upside with your wild card all in the world you want. But do remember to only put in the money you are comfortable to lose all in your premium.

The premium and IV are also getting a lot more expensive now than in the past few weeks due to fueled market participants already in the market, so it is best that you take that into account to see if it is still worth the risk/reward.

If you are someone who’d like to go short on the company, there are unfortunately no available shares available out there in the market to short. Even if there is, the interests to borrow are crazy high at this point as it is a very highly sought commodity in the market right now.

The alternative, and what many are doing right now, is to purchase a put option with your variable being the strike price and time expiry. The time decay is something you would want to pay attention to so it is recommended that you take a timeframe longer than March (I recommend at least March because that’s when GME will publish its quarterly earnings). Obviously, the longer the timeframe and the higher the strike price, the more expensive your premium will be.

Personally, I have taken a small position in purchasing a put option at a strike price of $60, with the expiry of 19 March 2021. The premium is not cheap but is relatively stable, even when GME share price was hovering in between $85 and $140.

The best part is you limit the maximum amount you can afford to lose too, so you won’t burn a hole in your pocket with the unknown factor.

It’s still early days, so I am sure it gets a lot more volatile once it is nearer to the decay period.

I trust that GME will go back to settle down at between $20-$30 once it settles down, which is right before the run-up. We just don’t know when that will happen. The faster it goes up fueled by Reddit warriors, the faster it will go down when the bubble bursts. Fundamentals are unlikely to change much overnight or even in a quarter even as they signaled an intent to go into more online than brick and mortar.

It’ll be a roller-coaster, so sit tight and watch it happen.

Once again, this article is a guest post and was originally posted on Brian Halim‘s profile on InvestingNote.