—
This column is written by @fayewang
-Faye is both a fundamental analyst and economist by nature. She is a global thinker who’s open-minded and enjoys learning from the market.

Brief Background
SATS Ltd. is an investment holding company, which is engaged in providing food solutions and gateway services. The company’s other activities include rental of premises and provision of management services to related companies. The Company’s operating segments include:
1) Food Solutions
2) Gateway Services
3) Others.

From the perspective of overall trend, revenue of SATS is quite lackluster over the five years, but the company managed to improve their net profit margin significantly. The robust margin growth in FY16-17 was mainly due to higher share related to associates and joint ventures. However, there would still have been 10% growth in net profit if exclude effect of the one-off gain. The enhanced margin was also a result of efficient operation and technological innovation. The amount of free cash that the company held was $508.4 million, which could fully cover the company’s current liability of $409.9 million, thus we can conclude SATS had sufficient money in hand and was at a strong cash position.

Food solution is the largest segment of SATS and contributed 56% of the total revenue in FY16-17, 43% of the revenue was driven by the gateway services segment, and both segments have reported higher result in revenue and profit of FY16-17. However, the higher net profit margin was mainly driven by its gateway services.

+New terminals at Changi airport
Terminal 4 will be ready for use soon, and it will bring great enhancement of Changi Airport’s capacity. The 5th terminal, which will be the largest terminal, is in the pipeline as preparation for further increasing passenger movement by 2020s. The expansion of Changi airport is a positive catalyst for SATS. 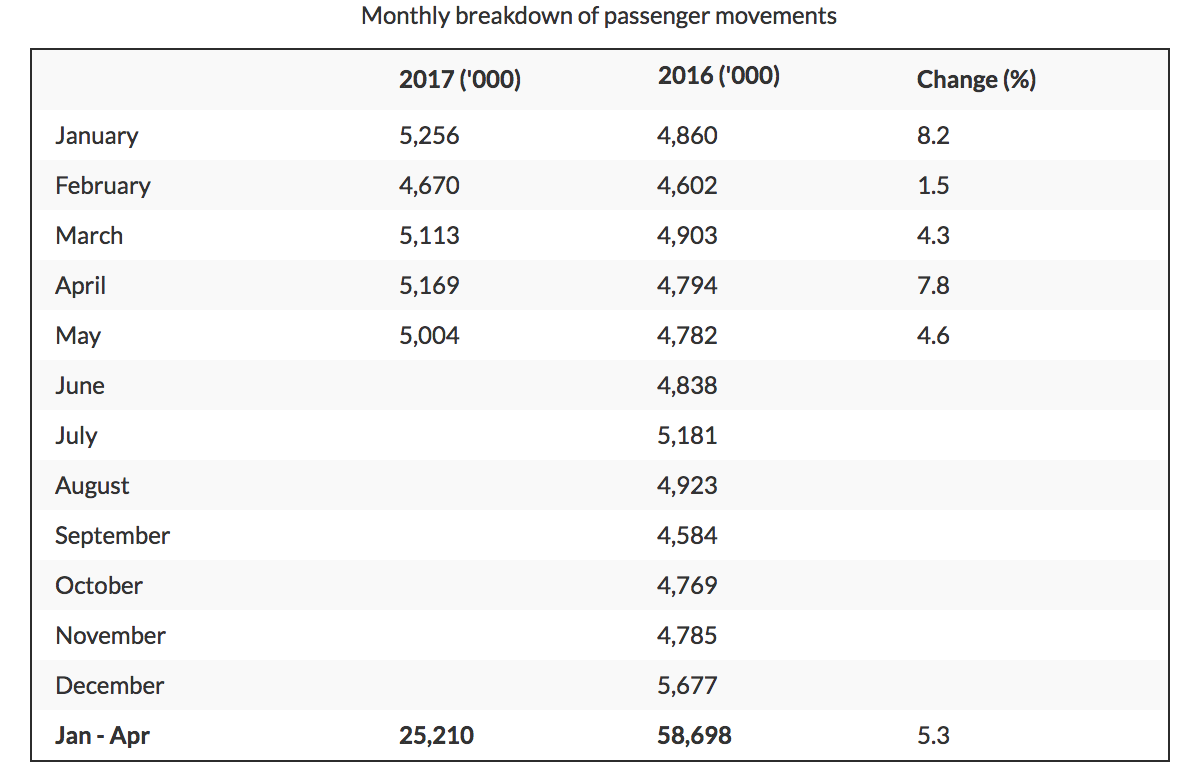 Data source: Air Traffic Statistics.
According to the air traffic statistics, despite a monthly drop in February, number of passenger movements has witnessed 5% increase in the first quarter of 2017. Based on the data of May and June, the uptrend is likely to continue. Possible reason can be the Japanese tourism boom, which registers strong growth of 16.4% YoY to 9.1m foreign visitors according to OCBC researchers.

+/=Joint Ventures
SATS divested its shares in Jilin Zhong Xin Cheng Food (Jilin JVCo) from 35% to 21% in June 2017. OCBC stated it was beneficial for SATS as it can capture further opportunities by collaborating with additional strong partner.
SATS launched its Technology Innovation Centre called TechnIC@SATS, which a joint project co-founded by the Civil Aviation Authority of Singapore (CAAS) and Singapore Economic Development Board (EDB). Through the JV, SATS improved its productivity and the improved net margin can be the evidence.
Also, SATS has executed the collaboration with Wilmar through JV between Singapore Food Industries (SFI), which is the subsidiary of SATS, and Yihai Kerry Investments (YKI), which is the subsidiary of Wilmar International (Wilmar). This project will provide healthy food to China market and SATS will be benefit in the long term as the JV is expected to breakeven by 2019.

-Deteriorated yield of airlines, cost-cutting measures of Government
The falling earning of the airline industry will bring SATS with greater pricing pressure. Despite higher passenger movement, the Local in-flight catering revenue kept flat in 2017. Additionally, Government will reduce its subsidy on the staff cost. Thus, there is expected to be lower franchise fee rebates since 1 April 2017.

Key Takeaways
SATS is a leading food solution and gateway services provider in Singapore market, and it maintained the top position with continuously increased net margin and over 80% market share at Changi Airport. Sufficient free cash and solid balance sheet became solid support for SATS’s fundamentals. SATS is on the list of top 30 dividend yield companies, and has compensated its shareholders with increasing dividend over past few years. The aviation industry has experienced headwinds, yet is rallying with recovering tourism and expansion of Changi airport. In the near future, SATS is likely to be benefited from stronger supports by its associated companies and JVs.