If you have not heard by now, the latest scandal involving a blue chip payments aggregator company, Wirecard has sent its shares plunged down by nearly 62% after the company revealed that for the third time they are unable to publish its annual report for FY2019 on time.

This post was originally posted here. The writer, Brian Halim is a veteran community member and blogger on InvestingNote, with username known as 3Fs and has 2169  followers.

Unlike the previous two sessions, this time round the findings are a lot more serious when its auditor EY refused to sign off the audited statement after casting doubts that up on the €1.9b of cash equivalent and security deposits they are currently reporting in the balance sheet.

What is worse for them is they have another €2b loan covenant due by this Friday and that the banks can call up this loan if the company failed to produce a signed audited statement.

In the last reporting figure, the company revealed that they held cash equivalent of €3.3b so after taking into account the two events added together, it would put serious doubt over their liquidity position as a going concern. 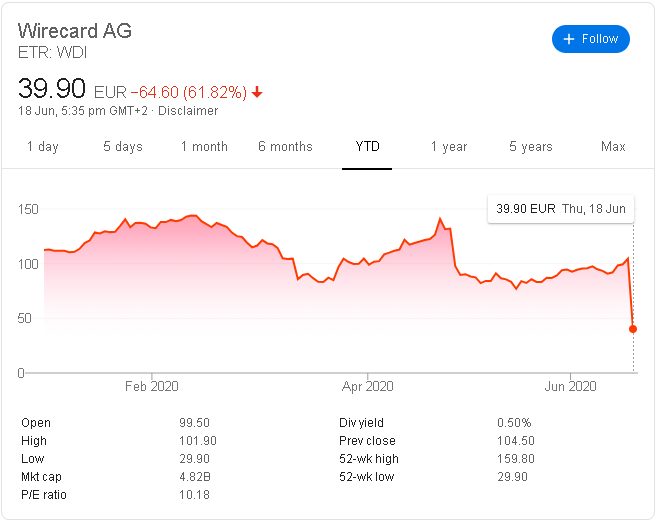 Wirecard Chief Executive, Markus Braun commented in the after hours of trading that it cannot rule out the fact that Wirecard AG has become the aggrieved party in the case of a potential fraud of considerable proportions. The company has also taken decision to remove board member and COO, Jan Marsalek with immediate effect, replacing him with Dr. James Freis, who is appointed the new compliance board with immediate effect to oversee the case.

So what does this means for investors then.

I’ll try to pull out some best and worst case scenarios for the company at this point given the amount of limited information the public has involving the scandal.

Wirecard plays victim to a fraudulent incident involving individual party/parties, pointing all fingers and incident to the person or trustees involved and seek legal protection over the loan covenants callable by this week.

By doing this, not only will the company be able to delay and potentially recover the loan covenants but also protect the reputation of the company and its board members.

After this scandal event has blown over, the company can start afresh and rebuild on its corporate governance. The company still has a good business model working with many solid companies that’s still growing.

Wirecard still plays victim to the fraudulent incident, get through this dark event, but somewhat managed to pull off by surviving with sufficient liquidity to continue, providing auditor is willing to sign off with an emphasize matter on the corporate governance issues.

The company may have to replace its board members and management with new faces and start rebuilding its reputation again from scratch and to convince both partners and merchants that the company still has a good business model to work with.

The most serious case, if this dragged on for much longer will be a total loss of confidence from both its merchants and customers who are partnering with Wirecard.

If major card partners such as Visa, Mastercard and Amex decide to withdraw their agreement with Wirecard, it would be detrimental to the company’s survival as they would become redundant as an aggregators.

If financial regulator BaFin (similar to MAS) withdraws Wirecard’s banking license, it would also be game over for the company.

I think both scenarios are unlikely to happen at the moment given that the ongoing case is still pending an outcome so this will likely kick in when we know the results and emphasis matter from the auditor itself.

This is almost like a casino roulette for now.At the current valuation, the company is trading at a price to earnings multiple of only 9x, which fares across its other competitors (E.g Adyen)in the same region who’s trading at 190x.
The company can go from the current share price of €40 back to €100 or it can go straight down to €0 if the worst scenario takes place.
To think that the recent fraudulent sales allegations involving Luckin is big enough, this time round it’s even larger and more serious repercussion with Wirecard being a fintech company, which would surely put an alert for more due diligence revolving the financial industry moving into digital world.