How well do you know how to utilise support and resistance for trading? 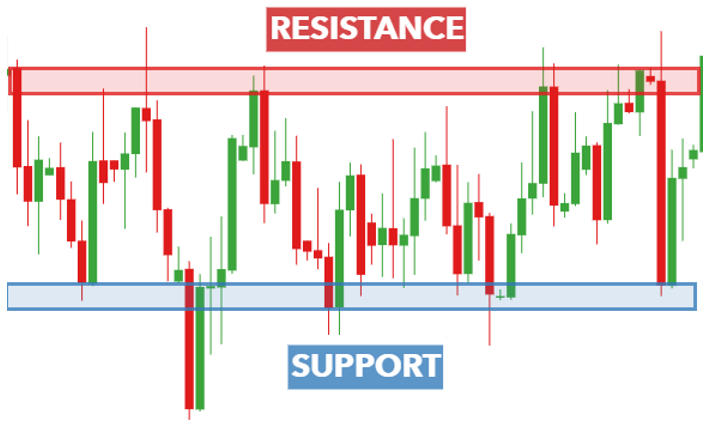 This post was originally posted here. The writer, Rayner is a veteran community member and blogger on InvestingNote, with a username known as @Rayner and has 605 followers.

Here’s a quick quiz for you about Support and Resistance…

The more times support and resistance is tested (within a short period of time), the stronger it becomes. (True / False)

You should set your stop loss below support and above resistance so you don’t get stopped out easily. (True / False)

You want to buy near support because it offers a favorable risk to reward on your trade. (True / False)

Do you want to know the answers to these questions?

If you read most trading textbooks, they’ll tell you that the more times support and resistance are tested, the stronger they become.

But that’s not true, because the more times support and resistance are tested within a short period, the weaker they become.

(This buying pressure could be institutional orders, retail orders, the smart money, etc.)

So what happens when the price re-tests support multiple times?

Well, these orders start to fill up.

Eventually, when all these orders are filled up, there’s no one left to buy and that’s when support breaks.

This means the more times support and resistance is tested (especially within a short period), the weaker it becomes.

Why a short period?

Because it’s unlikely new orders will be “replenished” so quickly.

Multi-year high is a significant level to pay attention to

Here are a few reasons why…

#1: Losing traders hoping to get out at breakeven

Multi-year highs represent extreme optimism in the markets because most traders (and investors) are in profits.

But as you know, the price cannot go up forever. Eventually, it has to retrace or reverse altogether.

When that happens, many traders will exit their long trades.

However, not everyone will do the same. Some will continue holding, hoping the price could breakout higher to give them even more profits.

But when the market collapses even lower, they’ll regret not selling earlier as their open profits have been eroded and they are now sitting on their losses. They hope the market could re-test the highs so they can get out of their trades at breakeven.

For bearish traders, multi-year highs present an opportunity to short the market at a “high price” because they can reference the highs to set their stop loss.

So as the price approaches multi-year highs, the short interest from bearish traders will increase.

Momentum traders buy breakouts as the price moves above a certain level. It could be breakouts of a range, swing high, resistance, etc.

But what’s interesting is if the price breaks out of multi-year highs, it’ll attract attention from traders across different timeframes.

That’s because whether you’re a day trader, swing trader, long-term trader, etc. the multi-year highs will be something visible on your timeframe (and charts).

Now, whether you’re bullish or bearish, a multi-year high is a significant level for traders.

If you’re bearish, then you can reference it to set your stop loss above the highs.

If you’re bullish, then you can look to buy the breakout and have your stops below the previous multi-year highs (anticipating that it could become previous resistance turned support).

(And vice versa for multi-year low.)

Support and resistance are areas on your chart — not lines

In my early days of trading, I used to think my support and resistance lines are the best and the market will respect it to the pip.

But it didn’t take me long to realize my support and resistance levels keep getting breached, and I thought it was a breakout.

So I traded the breakout.

The next thing I know, the price quickly made a swift reversal in the opposite direction and I got stopped out.

So, I looked back at my charts and asked myself:

“What the hell went wrong?”

Well, it seems the levels I drew did hold up, albeit not to the exact pip.

I realized support and resistance are not lines, instead, they are areas on my chart. Here’s why…

There are usually two groups of traders in the market:

Traders with the fear of missing out (FOMO) would enter their trades the moment the price comes close to support.

And if there’s enough buying pressure, the market would reverse at that location.

But here’s the thing:

You’ve no idea which group of traders will be in control. Whether it’s FOMO or cheapo traders.

Thus, support and resistance are areas on your chart, not lines.

“What’s the difference between price and value?”

If you go to the supermarket and buy 1 apple for $1, that’s the price you pay.

And the value you get is an apple which you can eat immediately without having to grow apple trees and pluck the fruit yourself.

In other words, the price you pay has to be “cheaper” than the value you get, or else, there won’t be a transaction.

Now, what has this got to do with trading?

Well, you can enter your trades at any random price level on the chart but, it doesn’t mean you’ll get value. Just like how you don’t get much value when you pay $50 for an apple.

How do I find areas of value in trading?

Well, these are areas on your chart where potential buying pressure could step in and push the price higher, like support.

Now, it’s not guaranteed that support will hold, but if it does, then it won’t be long before the price reverses higher and goes back to “fair value”.

(And vice versa for resistance).

But here’s the kicker:

Support and resistance are not the only ways to define the areas of value on your charts.

There are other tools like trendlines, moving average, etc.

If you want to learn more, then check out these trading guides below…

When the price breaks support, it could become as resistance. Here’s why…

There are two reasons for this…

#1: Losing traders hoping to get out at breakeven

Support is an area where potential buying pressure could step in and push the price higher.

So if you think about it, this group of stubborn traders will create selling pressure at their entry price as they exit their positions, and if there’s enough of such traders, support will become resistance.

But that’s not all because…

Traders familiar with classical technical analysis will look to sell at the previous area of support as that’s what most textbooks teach.

And if you get enough traders “following” the textbook setup, it puts selling pressure on the previous area of support which could now become resistance.

Trading near support and resistance offers favorable risk to reward.

Look at this chart below:

As you can see, the price is far away from support. This means if you want to set a proper stop loss, it has to go below support and it’s far from your entry price.

Next, if you look at the chart, you’ll notice the price approaching a swing high where selling pressure is likely to step in.

So if you use the swing high as your target profit, you can determine your potential risk to reward on the trade which is less than 1 to 1.

So, how can you improve it?

Well, you want to let the price come to you and trade near an area of value (like support and resistance).

As you can see, the price is much closer to support right now.

Using the same stop loss and target profit as the earlier example, your risk to reward has been dramatically improved.

Can you see how powerful this is?

Same stop loss level. Same target profit. But, with a different trade location — which makes all the difference.

So remember, you want to trade near an area of value, not far from it.

Imagine… You manage a hedge fund and want to buy 1 million shares of ABC stock. You know support is at $100 and ABC is currently trading at $110.

Now if you were to buy ABC stock right now, you’ll likely push the price higher and get filled at an average price of $115 — that’s $5 higher than the current price.

So what do you do?

Since you know $100 is an area of support, chances are, there will be a cluster of stop loss underneath it (from traders who are long ABC stock).

So, if you could push the price lower to trigger these stops, there would be a flood of sell orders hitting the market (as buyers will exit their losing positions).

With the amount of selling pressure coming in, you could buy your 1 million shares of ABC stock from these traders which gives you a better average price.

In other words, if an institution wants to long the markets with minimal slippage, they tend to place a sell order to trigger nearby stop losses. This allows them to buy from traders cutting their losses, which offers them a more favorable entry price.

Go look at your charts and you’ll often see the market taking out the lows of support, only to trade higher subsequently.

The idea is to define the current market’s volatility and then subtract it from the lows of support.

This way, you are giving your stop loss a buffer that’s based on the volatility of the markets (and not just some random number).

If you want a tighter stop loss, you can reduce your ATR multiple, like having 0.5 ATR instead of 1.

Bonus: How to draw support and resistance like a pro

You’ve discovered the truth about support and resistance, and you can’t wait to use this powerful tool in your trading.

“How do I draw support and resistance correctly?”

So here’s what you’ve learned today:

How do you use support and resistance in your trading?

Once again, this article is a guest post and was originally posted on Rayner‘s profile on InvestingNote.