Since my initial post where I shared about how one can go about buying/selling in the Hong Kong Stock Exchange (you can read the post here in case you’ve missed it), there are a couple of readers who asked me on the companies I am looking at. This post was originally posted here. The writer, Lim Jun Yuan is a veteran community member and blogger on InvestingNote, with username known as ljunyuan and has 1176  followers.

Today, I’d like to share with you all the researches I’ve done about the Hong Kong-listed company Tencent Holdings Limited (SEHK:0700), and I hope you’ll gain a better understanding about the company at the end of it:

Historical Performance of the Company:

In this section, you will find some of the key performances of the company over a 5-year period (between FY2015 and FY2019 – the company have a financial year-end on 31 December): 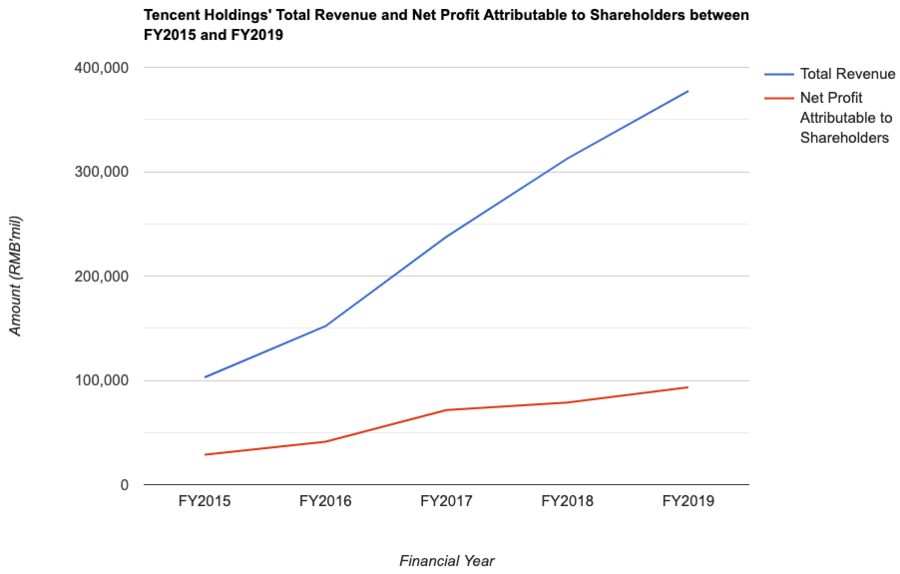 As you can see from the table and line chart above, both the company’s top- and bottom-line have recorded improvements every single year for the past 5 years:

Gross and Net Profit Margin, and Return on Equity:

Looking at the years between FY2017 and FY2019, all three of them (gross profit margin, net profit margin, and return on equity) have gone on a downward slide.

My personal opinion for this is because of the competitiveness in technology companies, and this can compress the company’s margins.

Does the company have sufficient liquidity to meet its short-term (those within a year) obligations? The way to find out is through what is called the “current ratio”, which can be calculated by dividing the company’s current assets by its current liabilities – and a value under 1.0 means the company may have problems meeting its short-term obligations (not ideal.)

With that, let us take a look at Tencent’s current ratio over the years:

Over the past 5 years, Tencent have been maintaining its current ratio at around the range of 1.1 to 1.2.

Over the past 5 years I have looked at, Tencent’s total borrowings have seen an increase every single year. With that, the company have sank deeper into a net debt position with every passing year.

Tencent’s Dividend Payouts to Shareholders over the Past 5 Years:

Tencent declares a dividend payout to shareholders on an annual basis (meaning one payout a year), with an ex-dividend date around mid-May. 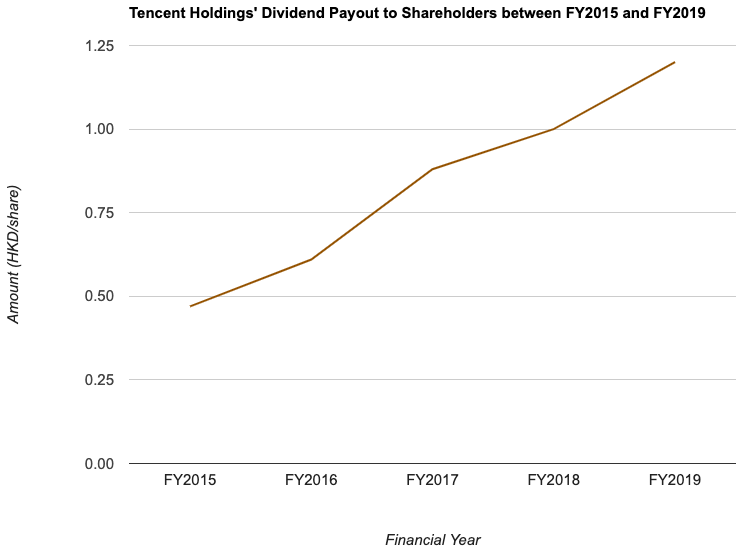 However, its low payout ratio suggests that the company have retained a huge portion of its earnings for future growth.

One of the ways I find out whether or not a company is considered cheap or expensive is by looking at its current valuation (based on its current share price), and compare this with the historical average (which I compute at the backend.)

At the time of writing, Tencent’s share price is trading at HKD440.60. As such, its current valuations is as follows:

The company’s 5-year historical average valuations (which I have computed) is as follows:

Looking at its current valuations, and comparing against its 5-year average, at its current share price, Tencent is considered to be neither trading at a discount nor at a premium – due to its slightly lower current P/B ratio, and a slightly higher current P/E ratio.

The writeup is by no means a recommendation to invest or divest in Tencent Holdings Limited. It is just a sharing for you to learn more about the company.

Some of the pluses include its growing top- and bottom-lines over the years (with CAGR of more than 20%), along with a growing dividend payout to shareholders (even though when converted to SGD, it is not much, but it is something.)

Disclaimer: At the time of writing, I am not a shareholder of Tencent Holdings Limited.

Once again, this article is a guest post and was originally posted on ljunyuan‘s profile on InvestingNote.