In the previous post, we talked about that one stock everyone was crazy over in 2017.

Now, let us look at what are the top 3 stocks with the highest returns in 2017: 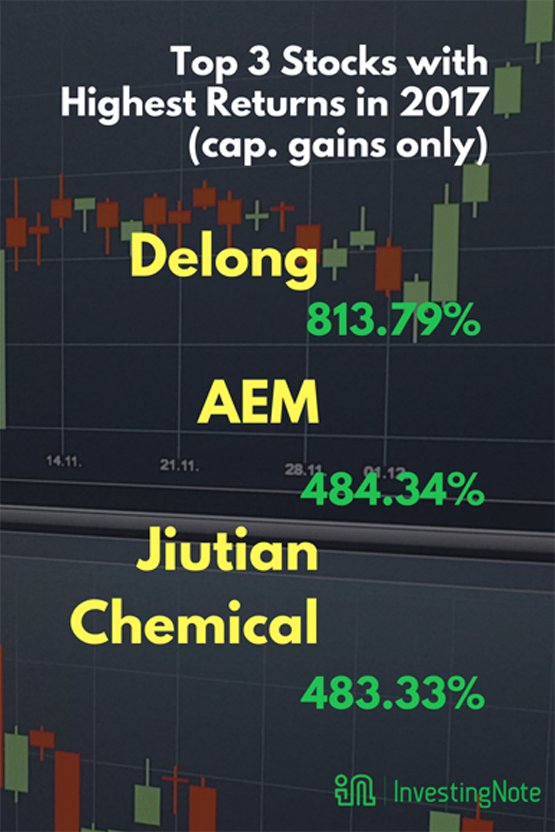 Delong takes the top spot with the best performing stock of the year with a whopping 813+% return in 2017. AEM takes the second spot at 484+% while Jiutian Chemical took the 3rd spot at 483+%.

Let’s take a quick look at what each stock’s company does: 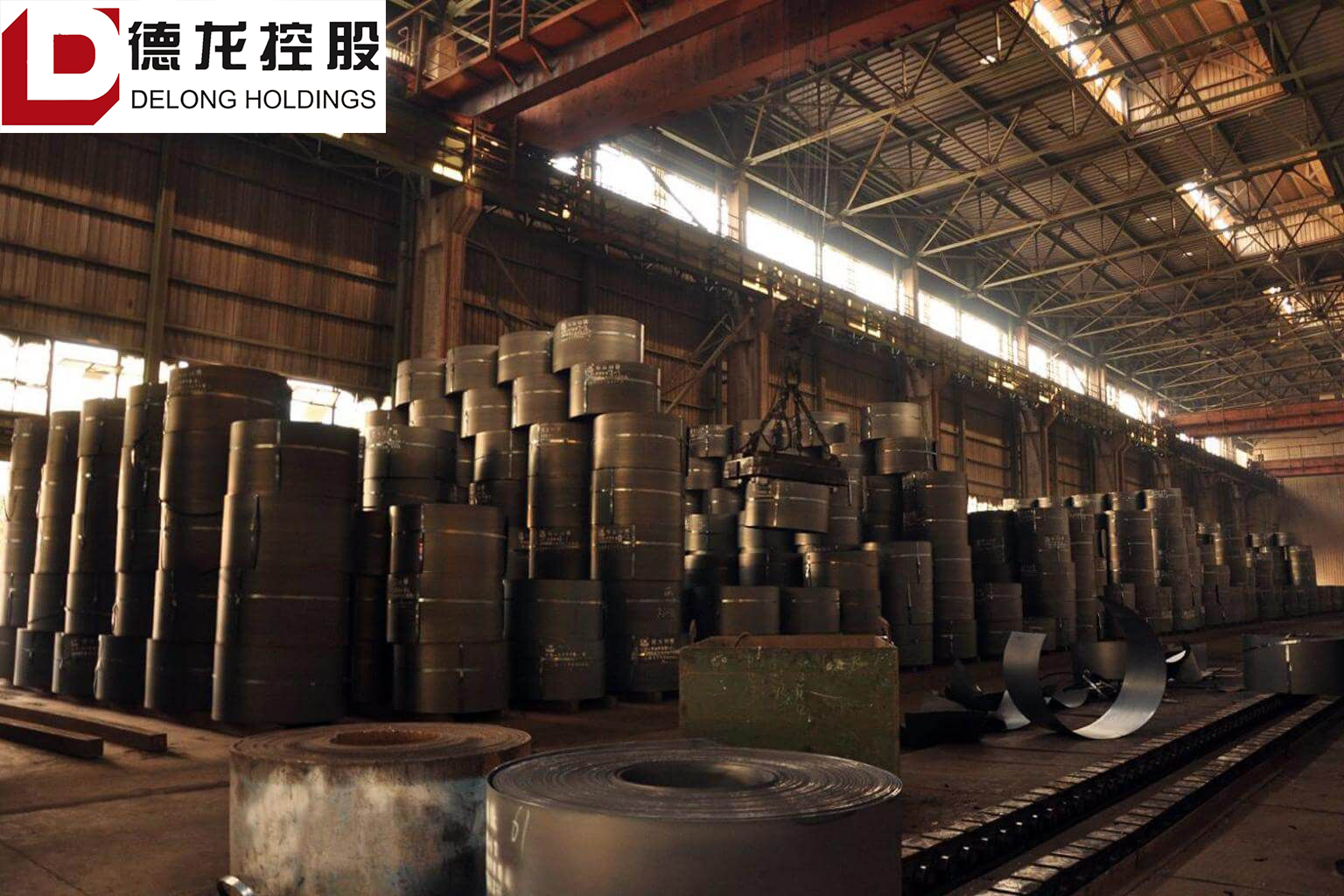 Highlights taken from its company factsheet:

-Currently amongst the top 10 steel producers in Hebei Province, the PRC

For the year of 2017, Delong has been queried a total of 4 times by SGX regarding trading activities, the Company’s first quarter results and also the entry into a Binding Memorandum of Understanding.

In the official response to the trading queries, the company and board stated that there’s no explanation for the unusual movement in price.

Delong was also one of the top performing stocks that gained 42.6% for the month of January, as reported by Geoff Howie @Geoff_Howie, author of the weekly SGX My Gateway Report and the weekly Business Times column Inside Insights. Here’s the post: https://www.investingnote.com/posts/528194 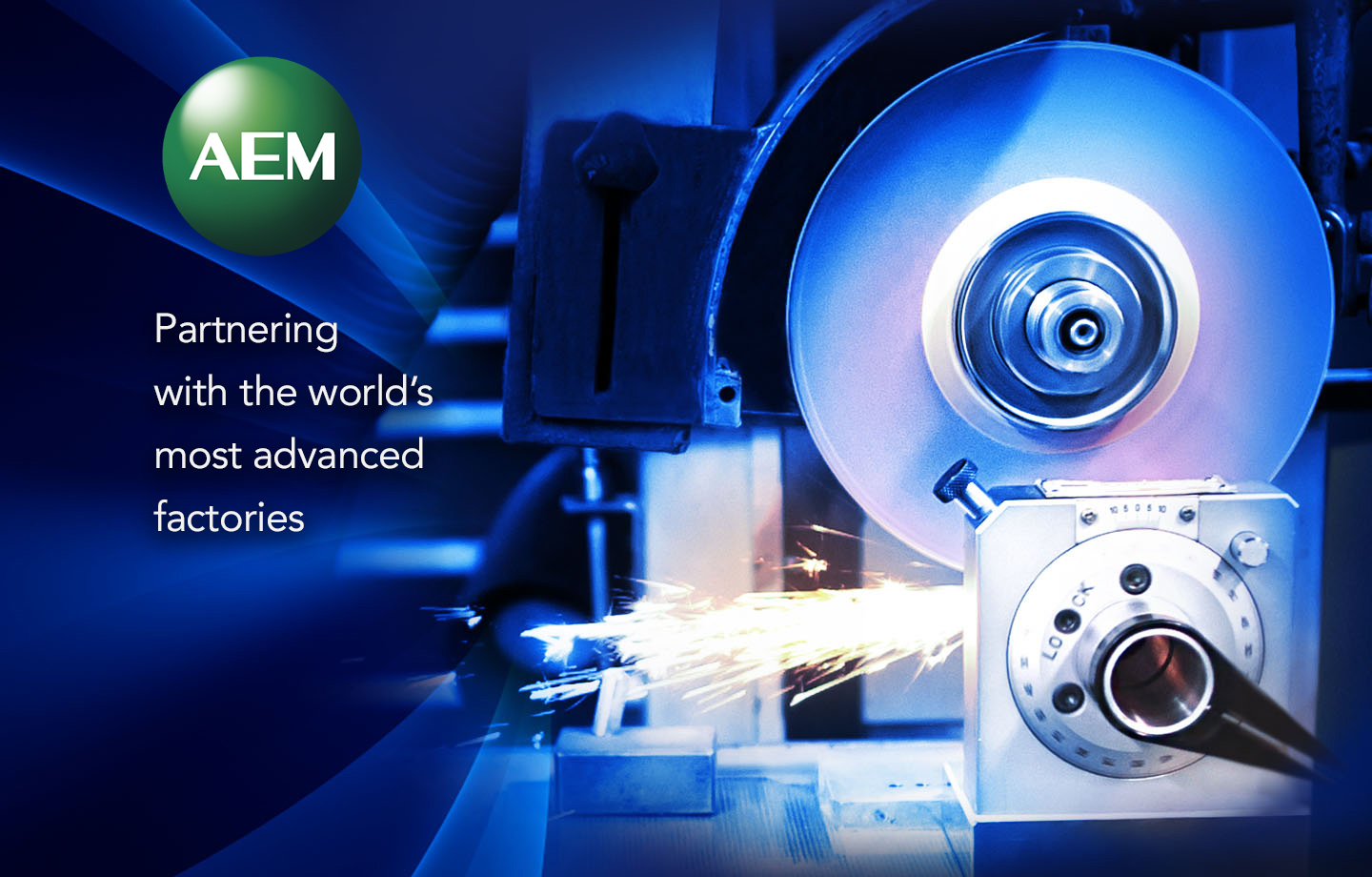 According to their 2016 annual report, they have 3 manufacturing plants located in Singapore, Malaysia (Penang) and China (Suzhou). They have a global market presence through their network of sales offices, associates and distributors, spanning across Asia, Europe and the United States.

It is interesting to note that AEM was a loss-making company back in 2014. However, they had a strong and successful turnaround, in which one of our users, @kennychia, mentioned in his blog back in 2016 https://www.investingnote.com/posts/38200:

“Management have been aggressive with their corporate restructuring since taking over AEM. For instance, in FY14 they disposed of their subsidiary, MCT, which was running losses for several years, to fund the growth of their core equipment and services business. In FY15, they exited from the stagnant plating business to further support its growth in its core businesses.”

AEM had a surprising 13 times share buyback within 250 trading days in a year!

Most of the share buybacks occurring within the last quarter of the year between November and December. AEM only had 1 trading query by SGX in August.

Jiutian Chemical was incorporated in Singapore on 30 November 2004 and listed on 2006.

The Company, through its subsidiary, Anyang Jiutian Fine Chemical Co Ltd, is principally engaged in the manufacture and production of methanol, dimethylformamide (“DMF”) and methylamine. The Group is also engaged in the processing and sale of consumable carbon dioxide and oxygen. The Group’s business is divided into three main business divisions, namely, the methanol division producing methanol; the DMF division, producing DMF as its main product and methylamine as its secondary product; and the gas division, producing consumable carbon dioxide and oxygen.

The Group sells its products to customers in China, which include customers in Henan, the surrounding provinces adjacent to Henan, namely Hebei, Shaanxi, Shanxi, Hubei, Shandong, Jiangsu and Anhui, and provinces in the Yangtze Delta Region, namely, Jiangsu and Zhejiang. Some of its customers are manufacturers of downstream products that use methanol, methylamine and DMF, while others, especially those located further away in the Yangtze Delta Region, are trading firms that distribute these chemicals to customers that use these chemicals in their manufacturing processes.

Jiutian Chemical had a total of 1 trading query throughout 2017.

The company had some major management changes which included a new appointment of the CEO and change of CFO.

It was also one of the most traded stocks in 2017, with total traded volume at 4.97 billion shares.

Little is known publicly about Jiutian Chemical Group Limited. There is no official website for this business.

What do you think about these 3 stocks that did exceptionally well in 2017?

Will they continue to outperform the rest for 2018?

Disclaimer: All research reports are of the analysts’ personal opinions and do not in any way reflect InvestingNote’s official opinion. InvestingNote does not issue a buy or sell recommendation on any security, and any research paper published by The Signal Blog is purely for informative purposes. This research is based on current public information, but we do not represent it is accurate or complete, and it should not be relied on as such. The information, opinions, estimates and forecasts contained herein are as of the date hereof and are subject to change without prior notification. It does not constitute a personal recommendation or take into account the particular investment objectives, financial situations, or needs of individual InvestingNote users. InvestingNote users should consider whether the information in this research is reliable, and suitable for their particular circumstances and, if appropriate, seek professional advice. The price and value of investments referred to in this research and the investment income from them may fluctuate. Past performance is not a guide to future performance, future returns are not guaranteed, and a loss of original capital may occur. Fluctuations in exchange rates could have adverse effects on the value or price of, or income derived from, certain investments.