This article, Vividthree IPO: Here are 5 Key Things You Should Know was originally posted here. He is a veteran community member on InvestingNote, with username known as SmallCapAsia. Vividthree Holdings can trace its history back to 2006, where they started out as a visual effects studio. Today, they are involved in creating content for the various platform by leveraging on the virtual reality (VR) technology.

In addition to that, they also provide Post-production services, mainly in visual effects, computer-generated imagery, and other post-production related work.

The company was previously owned by mm2 Asia with a 51% stake. Last month, Vividthree entered into a restructuring agreement to spin-off from its parent company and to be listed on the Catalist board.

The company is placing 51.8 million new shares at a price of S$0.25 a piece during the IPO period. The total number of issued share in the company immediately after the placement will be 334,011,764 shares.

Unfortunately, the IPO is not made available to the public and its prospectus did not provide any information about the cornerstone investors.

Here are some of the services that Vividthree provides, with subject to clients’ need:

Besides that, Vividthree owns a in-house content production business. In fact, this business segment was only started out in the beginning of FY2018 and since then, posted a larger revenue contribution to the company.

With the in-house content production business, the company are able to develop their own digital intellectual property assets or acquire them from third parties to produce virtual reality products such as thematic tour shows.

In March 2018, the company entered into a binding term sheet with Contents Panda to develop a virtual reality thematic tour show based on the film “Train to Busan”.

According to the management, they are one of the few companies in Asia with the capability to integrate engaging VR content with hardware devices and produce thematic tour show sets. 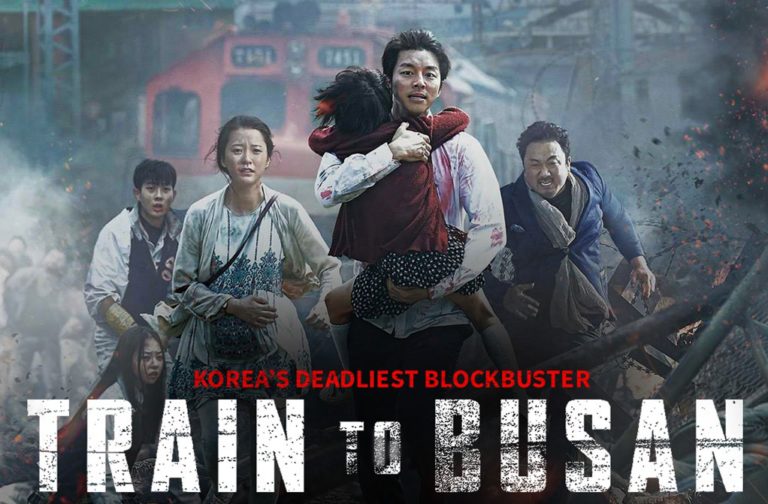 Vividthree Holdings will raise a gross proceeds of S$12.95 million upon listing. Around S$1.77 million of the proceeds will go towards listing expenses, which is roughly equivalent to 13.67%.

Minus off the listing expenses, the company will ended up with S$11.18 million, in which S$7.8 million will be allocated for general working purposes while the other S$ 3.35 million are set aside for business expansion through acquisitions or joint ventures. 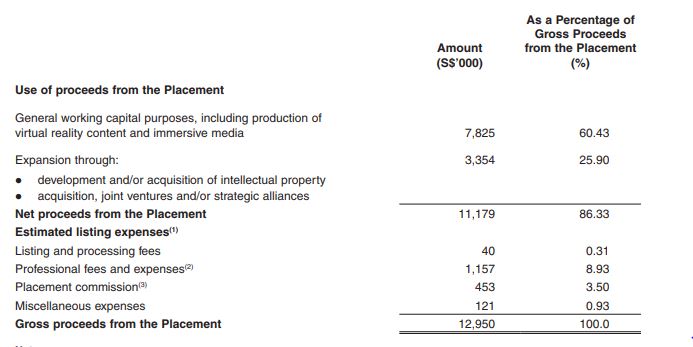 The company reported steady growth in revenue and net profit over the past 3 years. The revenue has increased from S$ 3.96 million in FY2016 to S$7.06 million in FY2018 at a compounded annual growth rate of 34%.

From the diagram below, we can see that the revenue contributed by Post-production segment for FY2018 has dropped to S$2.86 million from the peak of S$5.29 million in FY2017.

However, the declining revenue was offset by the content production segment, which contributed S$4.20 million to the company.

For the decline in revenue from post-production business, the management stated it was due to more emphasis being placed on content production, which provides a higher gross margin. 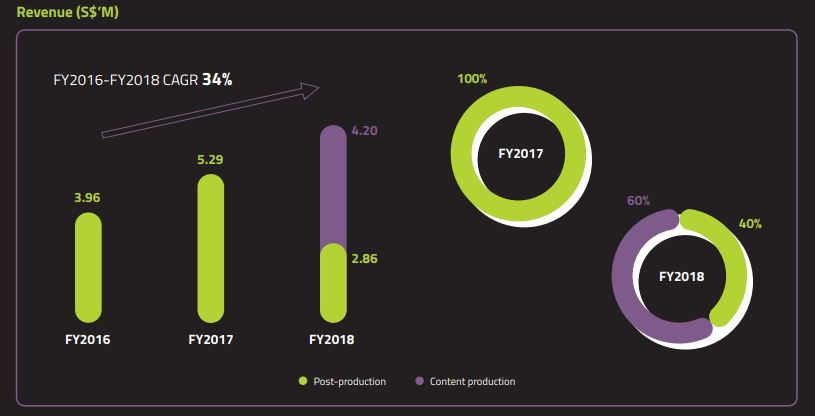 In tandem with the growth in top line, the net profit attributable to the equity holders recorded a growth of 39% compounded annually from S$1.41 million to S$2.71 million in the same period. 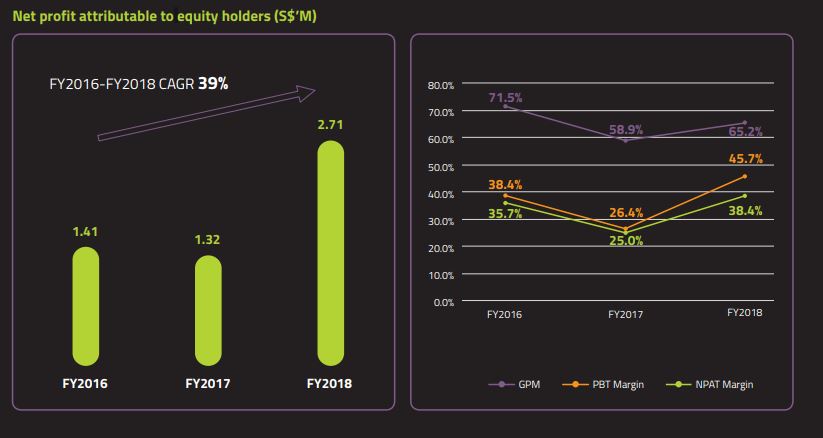 After assessing its balance sheet, Vividthree seems to be a cash-rich company. With a total debt of S$0.13 mil and a cash and cash equivalent of S$ 2.35 mil, the company is sitting on a net cash of S$2.228 mil in FY2018. 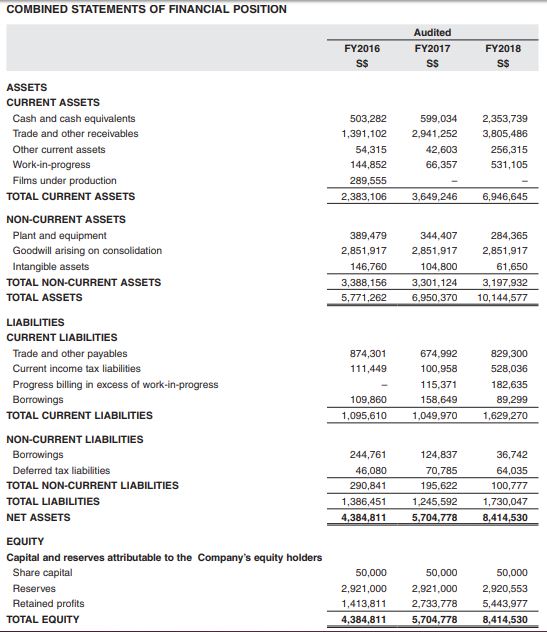 With the advent of virtual reality to the public, the entertainment industry has been changed significantly in the past few years.

There also has been an increasing trend of immersive entertainment and media in the form of multi-sensory experience for individuals or groups at any physical location.

With the help of virtual reality technology, it is now possible for us to have inanimate objects appear animate in a three-dimensional space.

By tapping into the growth of virtual reality, the company aims to build up their own digital intellectual through additional development of virtual reality products and other immersive experience. These include thematic tour shows, educational materials and video games.

As of 17 August 2018, the company has an order book of approximately S$1.5 million, based on signed contracts, confirmed quotations and orders for ongoing projects.

With a market capitalization of S$83.5 million upon listing and a net profit of S$2.7 million in FY2018, this translates to a whopping historical PE of nearly 30 times!

Furthermore, the company do not plan to pay any dividends in the future to allocate their funds for future growth.

In a nutshell, Vividthree is not for the faint-hearted. Its high valuation is justified with its future growth plans to tap on the exponential growth in the VR industry and dynamic content production.

Once again, this article is a guest post and was originally posted on smallcapasia.com.

He’s also a part of our community and premium analysis provider of Value Momentum. He also joined us for our very-first corporate visit to Centurion Corp!

Follow him and also see what other investors are saying about the current market right now: (click on the view now button)